Hey comic fans, JT first review of the week, none other than the flagship series of the Dark Knight, Batman. After Bruce Wayne's likeness was stolen by Clayface in the last issue, let's see how he deals with taking his name and image back! 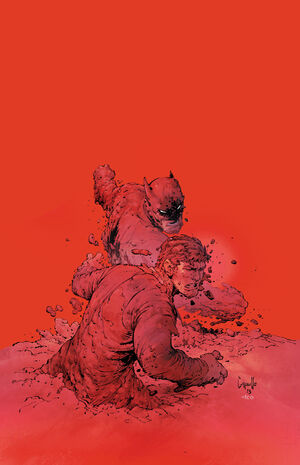 Summary: I have no idea why that cover is red... mine is not but that's the one DC had listed. This issue starts with Clayface revealing his plan to kidnap Bruce, pose as him wearing Batman's gear since Bruce is his benefactor, then the real Batman will show up to stop him and he'll touch Batman then he can post as Batman and get Batman arrested and thrown in Arkham. He throws Bruce into a room with Lucius Fox after supposedly suffocating him for seven minutes, but Bruce is still alive because apparently he can hold his breath for that long. Bruce and Lucius are in a compactor and about to be smashed when they stumble onto a prototype that Lucius had gotten rid of because it wouldn't be cost effective for twenty years. We then see Bruce and Lucius freed as Bruce dons the Batman Beyond suit for the first time ever. From there, Bruce says he's going to inform Batman and leaves Lucius to go get checked out. Clayface, still masquerading as Bruce, is eventually caught by Batman, but Clayface can't be stopped in the usual ways. Batman makes a cell to hold Clayface once he steps into it that will only open for Basil Karlo, and since Clayface no longer has his own DNA, he's trapped. Batman says now that he's stopped Clayface, he'll get Mr. Wayne to the hospital, but Clayface has some words about Wayne. He said Wayne cares about no one, not even his own son, stating when he touched Wayne to get his DNA a few weeks back, his son was with him, but while his son talked, Wayne looked distant and uninterested. Batman yells at Clayface as he turns into Damian Wayne, until Commissioner Gordon stops Batman as Clayface smirks on as Damian Wayne. The issue comes to a close with Bruce telling Alfred he doesn't want to shut down the way he did when Jason died, as he and Alfred watch the Cowl patrol footage of Batman and Robin, together.

Thoughts: Hm... this issue seemed kinda average for me. I get that Snyder is doing shorter arcs now before the big Zero Year, but this seemed kind of unnecessary. I like that Clayface was evolved further but he was already made a threat in Detective Comics (or one of those other twenty Batman Books) not too long ago. I did like the little nod to the Batman Beyond suit, as well as using Clayface to show us Bruce being taunted by Damian, which was an awesome moment. I really believe that Damian was gonna die in Death of the Family, and Grant decided to use his death instead in Batman Inc. and this kinda confirmed that for me. Anyway, this wasn't a memorable issue but it wasn't bad either.