Red Hood and the Outlaws #20

Hey Todd Squad, JT here with my first review of the week, James Tynion IV's second issue as writer of Red Hood and The Outlaws. After the last issue where Jason gave up his memories completely, by mistake of course, Roy and Starfire are trying to help get them back from S'aru, aka Aang, because I forgot his name while doing this review. 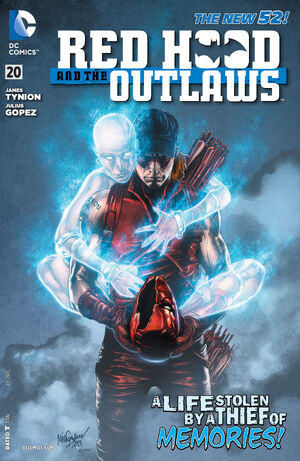 Summary: This issue continues where we left off, with Roy and Kori trying to get this floaty magic guy that looks like Aang from Avatar to give Jason his memories back. He tells them when Jason said he wanted his bad memories removed, that counted as all of them, since they're linked. He shows them Jason's bad memories but Roy said Jason would never have wanted this, and demands his memories are returned, but Aang says no. He shows them one of Jason's memories, where we see Roy getting beat up outside of a bar in Gotham when he was a junkie, but Jason shows up, introducing himself to Roy as Robin, Version II, and saves Roy from the goons. He tells Roy that if he needs a friend, he's there for him, since his predecessor said he was a good friend before Roy became a Junkie. Roy says friends always let you down, but Jason keeps the invite out there before taking off into the night. From there we see Jason and a gang of mercenaries (including Cheshire) doing what Jason thought was the right thing until he realized they were there to steal an artifact and felt betrayed. Roy tells Aang that although they were far from perfect, this is why the team got along so well, and Aang says Starfire has more secrets than them all. Starfire gets defensive as he says Starfire has selective amnesia, and remembers far more than she lets on. He pulls up one of her darkest memories and we quickly see her shooting energy blasts at Nightwing for some reason, before she stops him from showing the memory. Jason, still with no memories, says he's sick of everyone fighting over him, and if he did this he must have had a good reason. He asks Roy to respect that but Roy says no dice, and shoots him with a tranquilizer in the neck, causing Jason to pass out. Roy threatens Aang to return Jason's memories but he's nowhere near intimidated by him and banishes him, Starfire and Jason to outside in the snow. While recovering, Roy starts to breakdown, feeling betrayed by Starfire's lies about her memories and getting no answers when he asks her about Grayson, as they crouch over an unconscious Jason Todd. Unknown to them, Ducra, Essence and Aang are above them, as Essence says that she won't stand by while Jason and his friends are attacked by the evil coming their way, but Ducra and Aang says they know what they're doing by putting the Outlaws through this. The issue comes to a close as Green Arrow finds out that the baddest assassins from around the world are coming to collect a bounty on the heads of the Outlaws, and he says he'll have to save Roy once again.

Thoughts: Man... I enjoyed this issue a lot! It was cool seeing Jason's memories so we can still get a sense of what's happened and what hasn't in this not so New 52, and I really liked the addition that he's saved Roy before. It shows why Roy is so loyal to Jason, it shows how optimistic a younger Jason Todd was, and it was just a great scene with those two that adds to their friendship. I also really liked that they put out there that Starfire can remember things and has been playing dumb this whole time. It makes her more interesting and makes me wonder what she's been hiding and why she attacked Grayson at some point. Plus, seeing Green Arrow, Cheshire, Deathstroke possibly and a host of other people popping up in this comic is definitely a plus in my book.