Hey blog readers and true believers, JT here with my first review of the week, and keeping up the trend, It's Superior Spider-Man! In the last issue we saw a battle of the minds, literally, between Peter Parker, The Amazing Spider-Man, and Otto Octavius, The Superior Spider-Man. Now that we have a clear winner for the battle of Peter's body, let's see how things go from here. 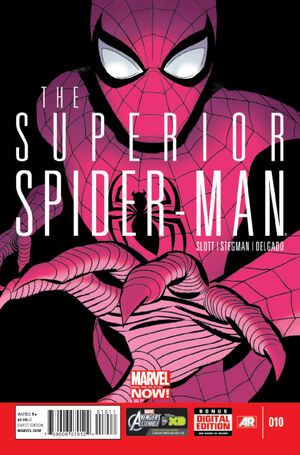 Summary: This issue starts off with Doc Parker waking up and ready to start his day with no further interruptions from Peter's consciousness, now that he's purged his memories. He then goes onto stop a gang war between The Owl and White Dragon and their respective thugs. It turns out Owl and White Dragon are two of the six bosses of the main gangs of New York, and while taking down the bosses, some of the thugs escape and are led to safety by thugs wearing a Green Goblin insignia. Interesting. From there we see Doc Parker heading to class when he runs into Mary Jane, but since he doesn't know how Peter would act, considering he no longer has his memories, he avoids her and says he's busy, which makes MJ even more suspicious. While this is going on, Carlie Cooper and Capt. Watanabe, who has returned from leave, questions the officers on duty about Spider-Man shooting Massacre, but they all cover for him and say they weren't looking, but Carlie reveals to the Captain that she did the autopsy and Massacre was killed from point blank range, not a stray shot like the officers claimed, so Carlie will have to find another way to prove her theory about Spider-Man. We eventually see The Green Goblin (!) rewire the tech in a Spider-Bot which makes it not pick up on him and his thugs as a threat, and uses this to send some of his goons to MJ's nightclub to burn it to the ground. While this happens, MJ is trying to remain calm, certain that Spider-Man will be there to save her and her employees, but Spidey is across town, having just stopped my main man, The Tombstone, and his gang, saying that the fire across town seemed beneath him so he dispatched it to the fire department, who manage to save MJ and her employees. The issue comes to a close as Superior Spider-Man reflects to himself that everything is under control and everything else is beneath him, unknowing to him, we see The Green Goblin surrounded by an army of thugs as he proclaims himself "The Goblin King!"

Thoughts: I am SO happy the Green Goblin is back. He popped up a few issues back but seeing him here and outwitting Superior Spider-Man was great. I'm excited for a few meeting with Superior Spider-Man and Goblin is right up there with Venom and Scarlet Spider-Man, both of which are coming up in the year. I really enjoyed him basically building an army while Spider-Man preoccupies himself with other people, and Goblin is really keeping a step ahead of him. I also like that the women in Spider-Man's life were featured here, with Carlie and Watanabe investigating him, MJ starting to realize something was wrong, Aunt May being proud of him about to become a doctor, and his date with Anna which ended in a kiss before he was called back to action. Add in a brief appearance by Tombstone, and I'm a happy camper. While I enjoyed this issue, the thing with the dude named Pedro who looked like Peter seemed a bit blah for me, as did Mary Jane's wait-and-see approach. I know Spidey always saves her but she could at least TRY to get out instead of waiting around for him. That annoyed me, especially when it wasn't just her life on the line but her employees as well. But besides those things, I enjoyed this issue and I'm excited to see what both Doc and Gobby have up their sleeves.