Hey guys and gals, JT here with my second review of the week, something I've been waiting for since I'd heard about the changes to the Batman and Robin title. So, without further adieu, Batman and Red Hood! 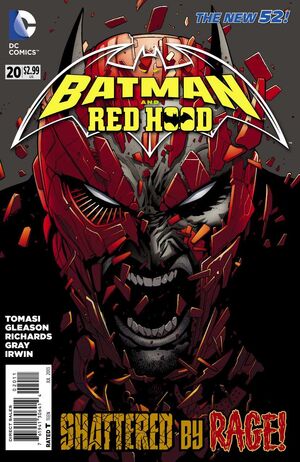 Summary: This issue starts off with Batman investigating some criminals when Alfred tells him he has a guest. Bruce heads upstairs to see Carrie Kelly, and after talking about Damian missing and Bruce saying he's studying abroad for a few years, Carrie returns most of Bruce's money, saying she doesn't take what she doesn't earn. She notices Titus and shows she has a bit of knowledge about dogs, but Bruce doesn't wanna hear this and tells Alfred to show her the door. Alfred offers Carrie a job taking care of Titus for a few days a week, as well as covering her food and gas, and she accepts. Jason eventually runs into Bruce, as he was there for one final check-up by Alfred to make sure he was fine after the recent Joker events, and Bruce invites him to go stop some criminals with him. Batman and Red Hood make short work of the cartel of snipers, considering a few targeted Damian when Talia put a bounty on his head, with Hood only shooting for the knees, elbows and hands, per Bruce's request. They eventually take them all down, with Bruce paralyzing the nerve endings in one guy's hands so he'll never be able to use them again... well damn.

Jason asks Bruce why he asked for his help, he had fun but Bruce didn't need him there. Bruce reveals he did want to stop those guys but he had other motives, as the two drive, Bruce reveals that they are at the place where Jason died. Jason is obviously pissed about this, saying this is not somewhere he wants to be, as that was the worst day of his life, but Bruce says if he can help him erase the worst day of his life and bring Damian back. Jason attacks Bruce, saying he wants to move forward and not worry about his past and how Joker and Bruce have tainted his life, and the two beat the crap out of one another. Bruce says he needs to bring Damian back, he earned the right to grow up and he wants to give it to him, but Jason says Bruce has nothing else to give. Jason says he was ready to forgive Bruce and stand beside him and he threw it all away. He tells Bruce to take off his mask so he can kick his ass and Bruce does, and knocks Jason down. He tells Jason that he trained him better than that and to get up and hit him. Jason does just that and delivers a few stiff punches to Bruce's face, but Bruce says he's still standing while he stumbles. Jason grabs his helmet and says he's taking the car, then tells Bruce goodbye as he leaves him standing there. The issue comes to a close with Two Face holding a gun in a dark room, flipping a coin which lands on heads, then saying "No."

Thoughts: I loved this issue. Not just because Jason was in it, but of course that helped. I loved the way this was set up. Bruce was so upset, he was willing to let Jason shoot these guys, in a none lethal manner but that shows how angry he was. Also, Bruce fried the nerves in a man's hands because he was willing to kill a kid, which worked for two reasons, one, It shows how pissed off he was, which made a lot of sense, and it was something he could've only done WITH Jason. Dick would've done something or said something about that, as would Tim, but Jason didn't even bat an eye. Also, Jason was finally the bigger man here, and not only was he the bigger man, Bruce was in the wrong here. And seeing them fight over the place where Jason died, no masks, no tricks, just a fight between father and son. And Bruce clearly wanted to lose here, as much as I am a fan of Jason's, it was fairly obvious Bruce did this to punish himself on his second destination through the five stages of grief. I'm excited to see what happens with Two-Face now that they've shown he'll be popping up soon, as well as seeing how Bruce interacts with Babs after not only Damian's death but the Death of the Family stuff. I'm even a bit interested in seeing what they do with Carrie Kelly, plus hearing Bruce yell at Alfred when he finds out about her new job.