Hey comic fans, JT here with my second single review of the week, All New X-Men. Cyclops' team crashed the Jean Grey School's campus and offered an open invitation to anyone who wants to jump ship, and someone has. We already know who... as of last week, but if you don't read Uncanny X-Men, I guess you're about to find out. 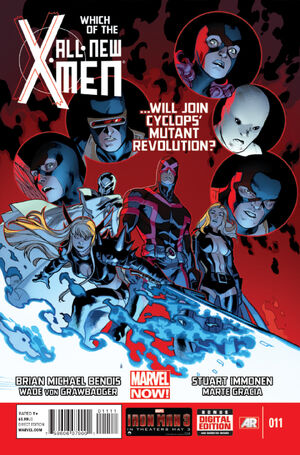 Summary: We kick things off with everyone getting upset that O5 Angel, Warren, has decided to join team Cyclops. Everyone tries to talk him out of it but he says Cyclops and his team are the only people making sense here. Jean, because she's been acting like a bitch since she discovered her new powers, tries to mind control Warren into going back into the school. She's quickly shut down by the Stepford sister, per Emma's orders, and taught a lesson about entering people's minds until Present Cyclops has her stand down, so Emma has the Stepford sister's stop. Warren takes his place next to Cyclops and his team and they all leave, leaving Wolverine and his students confused. We also see Mystique put a plan into action by posing as Pepper Potts and infiltrating his financial portfolio, then convincing someone working there that the X-Men are attacking the facility. Back at the Jean Grey School, Jean is comforted by Kitty Pryde, but told she needs to keep her emotions and powers in check, and that if she uses them to infiltrate someone's mind again, she will find a way to send her and the O5 back. Jean promises to use her powers for good and Kitty accepts her apology. From there, they decide to pursue Mystique, when suddenly Wolverine, Kitty, and the O5 (Minus Warren) are stopped in their tracks as the Quinjet is taken down. The issue ends with the team being told to surrender by none other than Captain America, Havok, Thor, Scarlet Witch, and Rogue, The Uncanny Avengers!

Thoughts: I don't understand why this issue came out after we already knew who was going to join Cyclops' team. It just seemed odd that It was built to be such a shocker when we've known for like two issues if you read Uncanny X-Men. I'm sure everyone doesn't... but yeah. That aside, I enjoyed this issue. I loved seeing Emma have the Cuckoos take Jean down a peg, it was a great moment for Emma and Jean needed it the way she was using her powers to make Warren do whatever she said. I also enjoyed Mystique's exploits, I don't know what her plan is, or if she just wanted Tony's money, but I'm enjoying her taking the main baddie role of this series. The ending with the Uncanny Avengers showing up was a surprise, but now it feels like the whole logic is put Team A in Book B, and repeat. I mean, we've seen the Avengers in Uncanny X-Men, The Avengers in All New X-Men, the Uncanny X-Men in All New X-Men, the Uncanny Avengers in All New X-Men, The Uncanny X-Men in Cable and the X-Men...it's getting old fast. That aside, I'm interested to see what Captain America and his team will say during the first five pages before they leave the next issue with no fight.