Red Hood and the Outlaws Annual #1

Hey blog readers and true believers, JT here, back from a brief hiatus due to injury. This issue should pick up where we left off, with an amnesiac Jason, Roy feeling betrayed, and Starfire feeling despondent. Also, a bunch of assassins are after the team, so unbeknownst to them, Green Arrow is coming to help, so let's get to it..


Red Hood and the Outlaws Annual #1 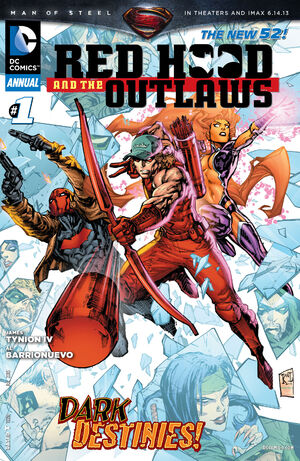 Summary: This issue starts with Jason sneaking into a room with a master computer to look up the Red Hood, and he's shocked to see numerous pics of him killing people, and his confirmed kill count at eighty-three, which I thought would be higher. From there we see Roy thinking about his past sessions with Hugo Strange as well as when he designed tech for Oliver Queen that Ollie never used but Ollie wouldn't let him come into the field. He eventually goes to check out the alarm that goes off but first tells a pretending to be asleep Starfire that he's not happy about her lying to him about her memories. Roy goes to investigate and finds Green Arrow, who warns him that Roy and his friends are in danger with 500 Million Dollar bounties on each of them. The talking is put on hold as there's an explosion with Starfire enters a room looking for Roy but instead finds a bunch of gasoline left as a trap which explodes when Starfire tries to illuminate the room with her flames. Roy arrives to seemingly see Starfire dead, after inhaling a Toxin by her attacker, Cheshire! Roy and Cheshire fight as Ollie goes to protect Jason at Roy's request. Cheshire and Roy's fight is laced full of her hitting on him and making sexual innuendo, which allows her to subdue Roy and take his hat as a trophy. Cheshire tries to attack her old pal Jason, they've worked together before but Jason doesn't remember, but Ollie and a poisoned Roy try to run interference, but Roy gets poisoned even more as a result. Ollie saves him with some anti-toxin as Cheshire prepares to paralyze Jason and take him with her, but Starfire returns and scoops Cheshire up, flying away with her but Cheshire manages to disappear (she can teleport or become intangible or something now), but not before saying she's keeping Roy's hate to remember him, and next time she may take one of his strong arms. (Ah, nice one Tynion.) Afterwards, Jason yells at Roy for telling him he was good, when he's a killer, and walks off, then Roy yells at Ollie, saying he never trusted him but apparently no one does, as he directs that comment at Starfire and walks off. The issue comes to a close as Roy and Star find a note saying Jason's leaving and not to come after him, we see him stowing away on the bottom of Ollie's helicopter, as well as the next threat for the Outlaws, the League of Assassins, lead by Bronze Tiger!

Thoughts: Does anyone else find it a bit... surprising that Roy invents tech when he was basically a class clown type character for a majority of this series? Also, someone wants to pay One Billion and Five hundred Million dollars for Jason, Starfire and Roy?! WHY?! That stuff aside, I enjoyed this issue. I was a bit wary of Tynion after all the bad stuff we've dealt with during Lobdell's run but this story was fun, it had jokes, we got to see more arguments of the team and it introduced a lot of threats like a bad ass Cheshire that I'm totally a fan of, Bronze Tiger, Roy's time with Strange which will surely come up more in the future. All in all, this annual felt like it was worth it, and I enjoyed it more than the I expected I would.