Hey everyone, JT here with my last review of the comic week, and surprisingly the only DC Comic reviewed here this week. So let's get this underway, with the Justice League taking on a much more powerful Cheetah then we're used to, as well as a Cheetah-like Superman, how does the league fare? 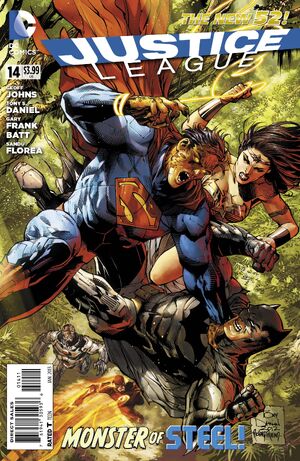 Summary: Things start off with a bang as Superman attacks the League, since he's been werewolf'd by Cheetah. His attack stops when the tribe the league were searching for show up with a horn, and blow on it to render Superman useless from the sound, thanks to his Cheetah form. Cyclops is able to mimic the sound to keep Superman incapacitated while the League split up. Batman and Cyborg stay with Superman and the tribe to try to cure him before he goes into shock from the Cheetah bite, as Flash, Wonder Woman and Aquaman pursue Cheetah. As the Tribe tries to cure Superman, they explain how the power of the Cheetah has been around for centuries and every generation has a person from the tribe that's chosen to host the Cheetah power. It turns out the Cheetah was hunted by a man known as the Godslayer who also killed other deities, but the Cheetah power survived, and until Barbara Minerva dies, the Cheetah power won't return to the tribe. Wonder Woman, Flash and Aquaman lure Cheetah to the water where Aquaman holds her until she loses her breath and passes out, allowing her to be captured. While in Belle Reve, we see Cheetah contacting someone, telling them the plan worked and she's in Belle Reve, and to let her know when Black Manta arrives. Back at the Watchtower, Batman reveals to the group after some research that Barbara Minerva is actually a long time criminal, often changing her name and appearance and she's wanted for theft, assault and even murder. Wonder Woman is obviously shocked to see that Barbara was a criminal before the Cheetah incident, and Barbara is the one who corrupted the Cheetah, not the other way around. Afterwards, we see Diana and Clark discussing how it's okay she was fooled by Barbara, because she's trusting and that's something he admires about her. From there, the two go on a date, as Superman and Wonder Woman... at a Smallville diner. So... yeah. They then go to the old Kent Farm, which is run by someone else now since Superman's parents are deceased (ugh... I liked the Kents) The issue ends as Wonder Woman and Superman kiss, and Batman creepily watches/listens with a tracker he somehow managed to place on Superman.

Thoughts: I get why it happened, but I really could've gone without this date. And how the hell fif Batman place a tracker on Superman.... he has SUPER HEARING. He should be able to hear something that's literally right on his back! Also, I can't help but be annoyed when Superman tells Wonder Woman he admires how trusting he is, when pre-New52 he was the most trusting guy around! Hell, he gave Luthor like a million chances to reform. Anyway, the stuff with Cheetah was interesting, I liked the swerve that Barbara's the evil one, that was interesting, as well as her apparently working with Manta and someone else. I'm also wondering if the Godslayer is someone we know, like Ra's Al Ghul or Vandal Savage, someone who could've been around to build such a legend. I did like that Aquaman is starting to get a little boisterous, which is building for his big beef with the League, which is soon if I'm not mistaken. So there were a lot of pluses to this issue, but the big sappy date with Supes and Wondy hurt my enjoyment of it.

Batman: Superman is one of the most important people in the world. This man is my friend. Tell me this will work.