Hey X-Maniacs, JT here once again with another review, and today we're tackling the most recent issue of Green Lantern. After leaving off with Simon Baz, the newest Green Lantern being confronted, rather violently, by the Justice League, let's see how he deals with his first threat as a Green Lantern. 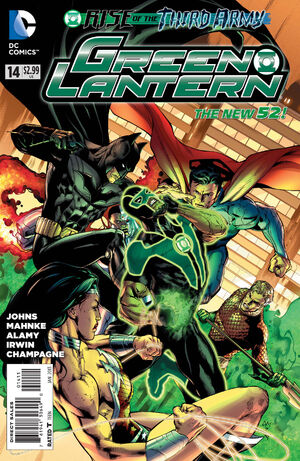 Summary: We get things started with The Guardians discussing how soon their new third army will have taken over the entire universe, in three months time to be exact. The Guardians are called crazy by The mysterious First Lantern, who says they're doing away with souls, and souls are what make life wonderful, but the Guardians retort he only values soul's to torture them. The Lantern says it's funny, now that he's seen what monster's the Guardians have become, and when he escapes, they'll be first on his list. Back on Earth, in Dearborn, Michigan, Simon Baz is confronted by the Justice League, and quickly concedes, saying Superman could take him out by himself, but he may be able to take Batman, to which Flash replies "Yep, he's a Green Lantern." which was a great line. Simon explains that he's not a terrorist, and the ring just showed up, as he pleads his innocence. The League believe him, but ask him to remove his ring as a precaution, and Simon is fine with that. Batman reaches for his ring but a huge Sinestro construct shoots out of it yelling "DO NOT TOUCH MY RING!" which The League interpret as an attack. Simon tries to explain that he didn't do anything, but they pursue him so he runs, and manages to escape with his ring, showing he's definitely a quick learner. Baz then meets with his sister, Sira. who gives him the name and address of the person who owned the rigged van he stole. She also tells him she doesn't blame him for her husband getting in a wreck from racing with him and falling into a coma, and neither would her husband. In deep space, the trapped Guardians, or Good Guardians are still trapped when they hear someone outside of their locked room, and it's the Black Hand. He resurrects the Guardian that was killed by the evil Guardians (confusing right?) and demands answers. He discovers he's in a prison known as the Chamber of Shadows and there is no escape. From there we see inside of Black Hand's ring, as we see Sinestro and Hal Jordan, when they're approached by a cloaked man telling Sinestro he must follow him, as it's time to pay for his crime, as this issue comes to a close.

Thoughts: This was a pretty quick issue, and a fast read. I enjoyed the parts with Simon, him thinking he could take Batman because he was "normal" shows that he's a bit cocky and uninformed, but his construct and the way he got the league off of him shows how innovative he is, which is definitely a plus for a Lantern. The stuff with the Guardians was a bit boring, except I am curious to see the first Lantern, and see if he has any ties with any current Lanterns. Other than that, this was a fine issue, I'm excited to see what's next for Baz as well as finally getting some answers for Sinestro and Hal Jordan.

Baz: I mean, you're Superman, even if I knew how to use this ring, you'd kick my ass by yourself. Maybe I could take Batman.
Flash: He's a Green Lantern all right!