Hey everyone, This is JT with the first review of the week. My first review this week will be one other than All New X-Men. The last issue ended with Beast somehow going to the past and asking Cyclops and the other X-Men Originals to return with him to the future and stop the evil, tyrant version of Cyclops we now know and love (well I do anyway.) So how do they respond? Let's find out! 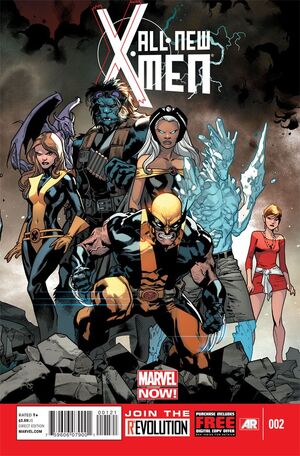 Summary: Things get started with Kitty and Iceman going to get Beast so he can join them in hunting down Cyclops, but they discover he's not there after Kitty phases through his door, which leaves them confused. Back in the past, the Five X-Men are skeptical about Beast's claim, so Beast tells Jean to read his mind, but Jean didn't know how to do that yet at that point. They ask why Professor X can't help Beast deal with Cyclops at his time, so he drops the bomb that Cyclops has killed Professor X in the future. The group is shocked and don't fully believe Beast but after some prodding and a conversation amongst themselves, they join him in traveling to the future. Right when they arrives, Jean is confused as the why the Mutant School is named after her now instead of Charles Xavier, and when Beast doesn't answer she starts to cry. In the school, Wolverine is teaching a class when he smells something, and heads outside, before running at Jean, unsheathing his claws and leaping into the air at her, until he's held in place by Jean. Cyclops and Iceman blast Wolverine, which brings Storm, Iceman, Kitty and some more people outside, and they see the past X-Men. They ask Beast what he was thinking bringing the Originals here, but Beast yells and starts to spasm. They take him upstairs and try to give Beast an IV and as they wait for Reed Richards, Tony Stark or someone from Horizon Labs (Peter maybe?) to show up and help, and Wolverine makes the Originals join him, showing him some clips of present day Cyclops on the TV. Jean makes Wolverine go to sleep, then shows that she could read his thoughts, and that he was proud of Beast for bringing them there. They decide they want to know more, what caused Cyclops to go insane and change so much from what the past Cyclops wanted to be, so when the TV says a New Mutant had recently been spotted, the gang sets their sites there to try to intercept Cyclops going after the Newest Mutant. The issue comes to a close as Wolverine, Kitty and Storm watch as the Original Five X-Men take one of their jets and leave.

Thoughts: I liked this issue a lot. This is exactly what I want from this series. Seeing how the past X-Men react to the future and seeing how the current people react to seeing the past X-Men. Plus, Wolverine seeing Jean is something I was looking forward to. I liked seeing the two Icemen meet up as well, since Hank isn't the only one with a giant transformation from the old days, the only person that got off easy was Angel. I'm excited to see how the Original 5 react when they run into Cyclops, especially if he's with Magneto, and if Scott has a breakdown when he see's the Originals, especially Jean.

Jean: This is Wolverine. He runs the school. And the rest of his thoughts are... pretty disgusting.