Hey guys, JT closing off my half of the new comic week with the Avenging Spider-Man annual... that's right, it's been a year already! Let's see how Spider-Man celebrated his year of Avenging. 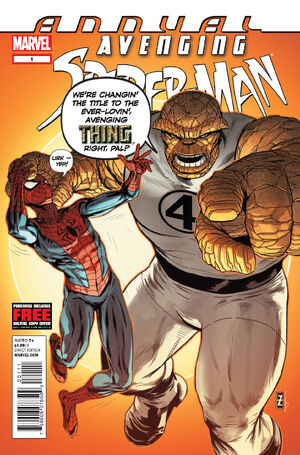 Summary: I'm not gonna B. S. you guys with a long drawn out review. This comic was bad. We basically got two brothers, one dumb as a box of rocks, and one slightly less dumb, who are looking for an alien artifact or anything left from a battle in Central Park since that's where the Avengers, The FF and everyone else seem to fight baddies from time to time. They stumble across a box that makes everyone angry and fight, and of course Spidey realizes that everyone is angry and fighting except for the two brothers, so he pursues them. He's cut off by The Thing, who falls under the spell of the device quicker than Spider-Man does, for some unexplained reason. Anyway, the smart brother decides that having everyone fight long enough so they can rob a bank or sell the artifact is a stupid plan, so the dumb brother ditches him, and Spidey pursues him, with the Thing hot on his tail. Eventually, the dumb guy tries to sell the device but things go awry, and when he turns it back on, instead of fighting, everyone wants to hug and love one another. This leads to Spider-Man and The Thing making out.... and it doesn't really matter what else happens here.... The device gets broken, the two idiotic brothers go to jail.. The End.


Thoughts: Well this was bad.... that's not the way you sell a comic, especially an annual. Don't get me wrong, I like comedic comics, I enjoy Deadpool and Empowered and any other comic that tries to get laughs.... but this was horrible and I REALLY could've done without seeing The Spider-Thing kissing hybrid. Instead of a line of the issue, here's a Second Opinion by my buddy X.

"Well this was a terrible comic and a terrible waste of money... No big name villains, no interesting story, and Thing and Spidey making out. I don't know what else to say about this one except don't waste your money on it! Terrible... Score: 3 1/2 out of 10."