Hey guys and gals, Marvel Now has begun, and with All New X-Men we're expected to see the original Five X-Men come to the future and see what they'll one day do, this story has a ton of potential, especially for Cyclops, Jean and Iceman. So let's get to it! 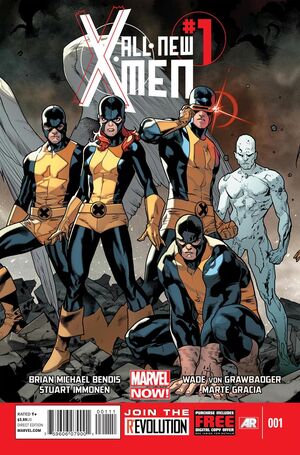 Summary: This issue starts with Beast frantically doing things while in pain, saying he's going through another form of mutant evolution, and he thinks this time it may kill him. He hopes to do something useful in the last days of his life and doesn't want to tell anyone else and burden them by making them worry when they can do nothing to help. From there we see a young woman named Eva out with her friend when she approaches a boy she likes, although their flirting is quickly broken up by Eva's big meat head brother (He's even shirtless for some reason) who punches Eva's crush. This turns into a big fight between the brother, the crush and the crush's friends as Eva yells for them to stop and apparently freezes time, discovering she's a mutant. She's then confronted by Cyclops, Magneto and Emma Frost, who recruit Eva, with Scott telling her he's done a lot that he needs to atone for, and he needs her help. We also see Cyclops and Magik break into a police station and rescue another new mutant, who's being interrogated for healing a woman with his mutant powers. Storm, Kitty, Iceman and Beast are arguing about what to do with Scott, as they have to stop him but going after him would result in a Mutant Civil War, which Storm wants to avoid. Bobby states that he and Beast have known Cyclops the most and if the old Cyke could see the current one he's beat the hell out of him, to which Beast surprisingly tells Iceman he's right. From there we go to the past and see Hank and Bobby telling Scott how upset they are that they were almost attacked by a mob of angry humans, and Hank says he's done risking his life for Humans (HA!) and how he thinks Magneto may be right about them, and how he's resigning from the X-Men. The conversation is cut short when a big blue Beast shows up, who Hank recognizes as him. Beast tells the five original X-Men, Scott, Bobby, Hank, Jean and Warren that he's come from the future for help, he needs Scott to stop his future self from committing Mutant Genocide, as this issue ends.

Thoughts: So, I really enjoyed this issue. I thought It was a nice introduction, especially for anyone who's kinda new to the X-Men like I am, having started reading X-Books when Schism started. I thought this did a nice job of setting up the storyline, building questions about Beast, and introducing a few new interesting mutants to Cyclops' fold. I did think Cyclops actually didn't come off as a bad guy here, which was interesting, I mean sure he was fighting people when he could've avoided it, especially in Eva's case, but meh, he still didn't seem like a full-fledged villain, all and all I'm pretty excited for this series, especially when the Original Five come to the future.

Hank: He's me.
Beast: I am.
Bobby: Is that what you look like when you don't shave?