Hey guys and gals,JT here with a HUGE review on tap, that Dan Slott said would set up things for ASM #700 and beyond, and he was not overreacting. No more delaying, let's get straight to it. 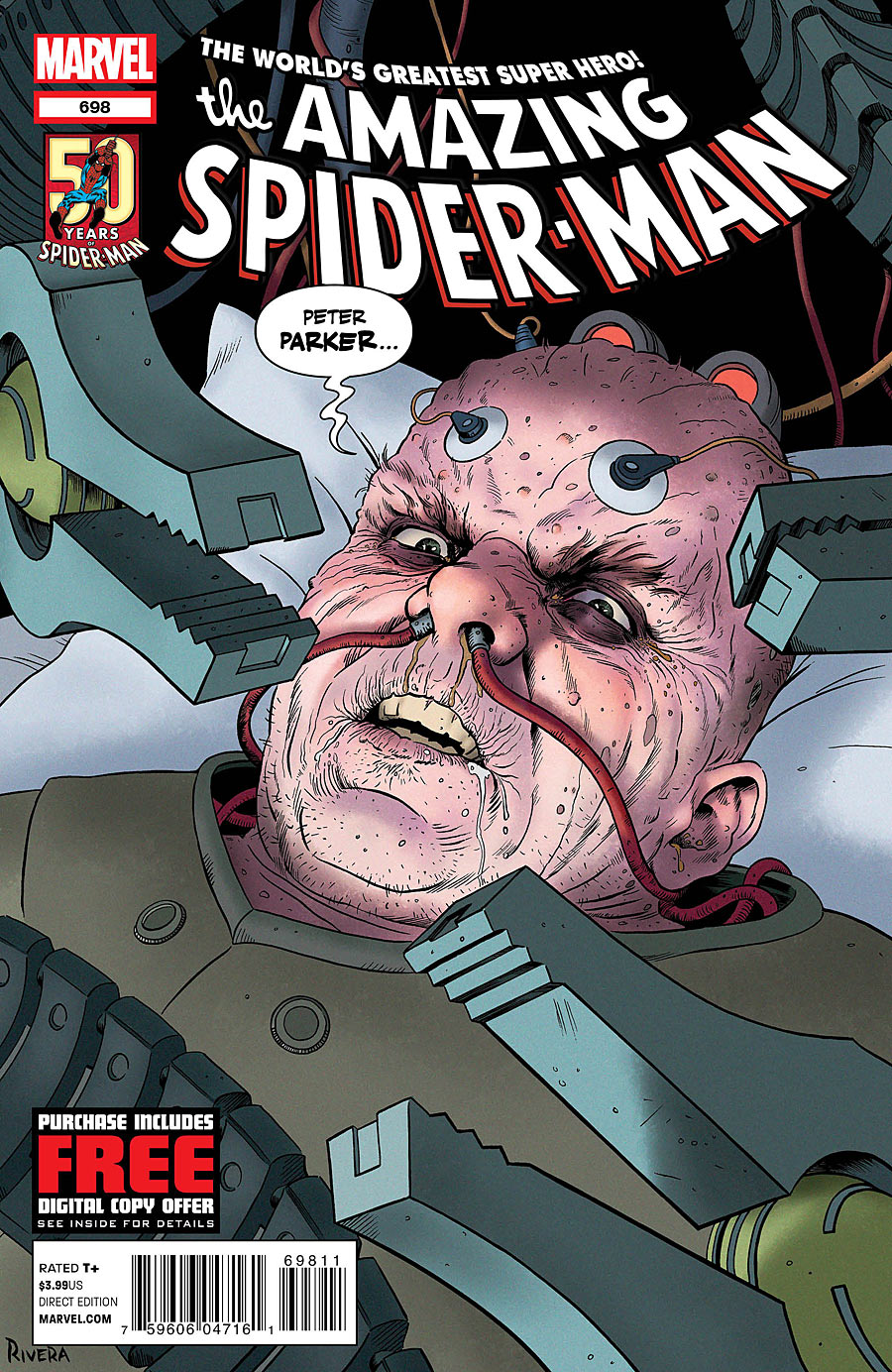 Summary: We kick things off on the Raft with the SWAT team raining down on Doctor Octopus' cell because he's finally speaking and showing activity after being basically comatose for the last few weeks. As they move in, Doctor Octopus mumbles "Peter Parker" as we see a gold Ockbot crawling along the top of a building. From there we see Spidey, happily web-slinging around New York until he's called to stop a crime, which he does by knocking a robber loopy. Turns out the robber is just a guy in a costume trying to avoid a harsher jail sentence since super-criminals have more leniency than an armed robber, but that didn't stop Spidey from knocking the guy out like he was punching the Incredible Hulk. Spidey flees the scene and heads home, commenting on how he's got a nice apartment, boyish good looks and more, when he notices a scar on his face he got during the Hobgoblin fight, which he vaguely remembered getting, then notes he "probably heals faster than most". From there Spidey listens to his voicemails, reminding him to stop at MJ's club (which causes him to remember them meeting for the first time and he says they should get back together), a message from Jay Jameson reminding Peter to come see Aunt May at the hospital (to which Peter refers to May as "That dear sweet woman." and lastly a message from Max Modell confirming Pete's evaluation at work. Peter heads to meet with Max and basically tells him that all of his experiments thus far have been child's play, and Peter has even better tricks up his sleeve. Peter then heads to his lab and mixes up a new batch of web fluid, remarking how incredible it is he came up with such a formula while only a Sophomore in high school. Afterward, Peter stops at MJ's club and tells her they should be together, he's tired of taking the little steps they have taken in the past. MJ is caught off-guard by Peter's presumptuousness and remembers she said she's go see Aunt May at the hospital and Peter says he's going too, and as MJ goes to get her coat, Peter winks at some nearby women. Peter and MJ visit Aunt May to see her first steps since the accident, and Peter tries to talk to MJ about getting back together but he's signaled on his Avengers ID card and has to go to the Raft, Jay tries to tell him he needs to be with his family but MJ vouches for Peter's job being busy and needing him for a big project so he leaves, but Aunt May comments to Jay that Peter seemed flirty with MJ and she may finally get some grandchildren. Spider-Man heads to the raft and meets with the Avengers when he's told Doctor Octopus has been asking for him, as Peter Parker. Spidey goes to meet with him one on one and Doctor Octopus whispers "Peter Parker". Spidey unmasks and says "Yes, I'm Peter Parker." to which a crying Doctor Octopus says he's Peter Parker. Spidey says not anymore, and reveals that at some point, he switched bodies with Peter Parker, and now Doctor Octopus, with all of Peter's memories and his body, plans to live Peter's life while Peter dies in his old, withered body, and Ock won't even reveal to Peter how he did this incredible trick. Peter (in Ock's body) flat-line's as the Medics come in and try to save him, meanwhile the NEW Spider-Man leaves, remarking he's got better things to do with the rest of his life.

Thoughts: Holy....shit. Who saw THAT coming? This issue blew my mind, so thanks Dan Slott for doing something amazing that literally shocked me. I was speechless for a few minutes after reading this comic, and seeing Peter in Ock's body, helpless and crying that he was Peter Parker was one of the saddest things I've read in a comic. Now there's a ton of ways this can go, obviously the morality that if Peter had let Doctor Octopus die, he could've avoided all of this. There's also the question of how long has this been in play? Did this start when he put on Ock's helmet at the end of Ends of Earth? How did Ock do this and how long has he planned it? Was there nothing Julia Carpenter could do to help Peter? The body change had to happen between this issue and #697 because Doctor Octopus seems to not remember how he got that scar for a second, when Peter got it fighting Kingsly and Urich. I'm interested to see if Ock stays Spidey, I mean we know Superior Spider-Man has a different Spidey but WILL it still be Octopus? And what happens now that Peter Parker is supposedly dead, although the medics could save him. Regardless of all of that, this issue was perfect. The reveal made a ton of sense and warranted a re-read as SOON as I finished it, which explained so many things. This was a perfect comic, and definitely one of the best single issues I've read, not just based on the shock value of the ending but the way it was crafted to show you that while this was Peter, it also wasn't. I look forward to seeing what Slott does from here.

Spider-Man: I've got better things to do with the rest of my life.