Hey guys and gals, after the first issue with the Joker's return and the shocking ending we saw, let's not waste anymore time in seeing how Batman and the rest of his allies deal with the return of The Joker. 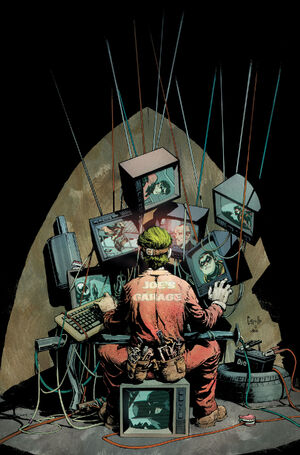 Summary: This issue starts off with Batman locked in a vat of liquid, the same liquid that turned Joker into the deranged man he is. Harley leaves as Batman yells for her to help, before eventually finding his own way out. He mentions while escaping that he's studied the liquid over and over on nights where he couldn't sleep, looking for signs of what made Joker him, but the only thing that liquid should've done is kill, adding even more mystery to how Joker survived. Batman arrives back at the cave and looks for Alfred, he goes upstairs and finds a purple package with green ribbon, and opens it to find a tape. He plays the cassette and hears that Joker has "Bruce Wayne's butler" Alfred, and has apparently burned his eyes with ammonia, to the point that Alfred thought he was blindfolded. Joker "does it again for fun" while Batman has to listen to the man that raised him scream out in pain. From there, Batman visits Commissioner Gordon, telling him he's taking him to a bunker to protect him against Joker, but Gordon is opposed to the idea, saying he needs to face him, even if it means opening up bad wounds. As Gordon says that he touches pictures of Joker being arrested and Gordon standing over Babs' hospital bed after she was shot by The Joker, when Gordon gets a paper cut and suddenly starts to bleed profusely. He's quickly taken to the hospital, as Batman and Nightwing talk on the roof, with Batman telling Nightwing that Gordon was poisoned with Blood thinners by The Joker. Batman then tells Nightwing that The Joker has Alfred, which makes Nightwing wonder if Joker knows Batman's identity. Batman says he doesn't think so, he thinks he just took Alfred because Joker said he's "planning a party" and would want Alfred, who is the best in his field. Nightwing starts to freak out but Batman makes him calm down, telling him he's not telling anyone else Alfred is missing, because they'd get angry and let their anger distract them which will only work in Joker's favor. Batman says Joker is re-creating his first crimes in new ways, and he needs to head down to the reservoir because he thinks Joker is going to poison the reservoir, and he needs Nightwing at the pipeline. Batman heads to the reservoir and finds The Joker waiting for him, as Joker tells him he's happy he and Batman can talk. He tells Batman he knew Bats would show up and try to stop him so he's already killed the people who would've drank the poisoned water and thrown them in the reservoir, and he also blows up the Pipeline, as Nightwing is blasted off his feet from the explosion. Batman charges Joker but he's restrained by a bunch of chattering teeth ropes, and Joker tells Batman he's the court Jester and he's telling Batman what no one else will, his family has made him lazy, made him lose his edge, and now he can't even deal with Owls without their help. So he's going to give Batman some bad news to help him, and he says it clear enough so Batman's allies can hear over their comm links, He knows who they are... every secret identity and address, and even what soap they use, and now he knows why Nightwing smells so good. He says their all fakers and phonies, but Joker says he knows one more secret, one Batman has kept from everyone except The Joker, who learned it from a book he found in the Batcave. Batman says he's lying, but Joker says we'll see, but in seventy-two hours, each Bat and Bird will be dead, and Batman will be the one who kills them, as the issue comes to a close.

Thoughts: Say what you want about Scott Snyder, but that guy knows how to write a story. I was extremely into this comic, especially at the big showdown at the end between Batman and Joker. The stuff with Alfred being tortured and Bruce listened on was done great, the way Gordon was taken out due to the insane plan by Joker, and everything about the way he apparently plans to "Tower of Babel" the Batman allies with Batman's plans. In the second feature we saw a bunch of crime bosses killed by Umbrellas by the Joker, to incriminate Penguin. Joker then tells Penguin that he'll lick the blood off of each umbrella and leave his DNA at the scene so people know it was him, if Penguin agrees to come to this party he has planned, to which Penguin begrudgingly agrees. I enjoyed that as well, as I'm curious to see what Joker has planned for this big party that has him hunting out Batman and his rogues.

The Joker: All of you, beneath your little maskssss! That's right. I know your little secrets identities!