Hey comic fans(they prefer "X-Maniacs", buddy...), the last review of the comic week is Nightwing #17, reviewed by yours truly, JT(hey, don't forget me!  It's me, X! And I'll be backseat driving this review!). After the events of Death of the Family and pretty much losing his money and circus(♫sad trombone♫), Dick may have finally lost it all. Let's see how the first Boy Wonder copes with his world crashing around him(damn  you're dramatic, JT!). 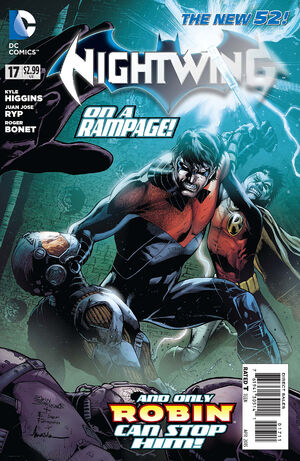 Summary: Nightwing, still reeling with the aftermath of Joker's attacks on not only the Bat-Family but Dick's personal life as well, has to begin to pick up the pieces in this issue. He starts off being told by Alfred that if he needs to talk, he's there for him, but Dick says he's fine, as Damian watches on in the shadows. From there we see Nightwing recover Raya's body and inform Gordon about her, and Gordon asks how he's handling everything but Nightwing maintains that he's fine, and once again Robin is watching him from afar(you're getting a bit creepy, Damian...). Dick then heads to the hospital to check on the Big Top performers, and some resent him, as one guy says that Dick should stay away from them, and after the funeral they all quit. Who elected you leader, you ass(hey, maybe they had a secret election while laying in their hospital beds and the jerk won!). Anyway, a little girl(or midget...) that was there comforts Dick and asks how he's dealing with things, and Dick once again says he's fine(jeez, he said he's fine, people!  Back off!). Dick also says he's fine(seriously!? Stop asking how Dick is doing!!!) to Lucius as he finds out that Amusement Mile is burning to the ground due to Joker's chemicals, and also finds out he's basically broke now, as all of his money was tied up in the circus. At the funerals for Raya and Jimmy..wait...only TWO people died? Joker is slacking(he used his magic non-killing Joker toxin, JT! Why does he have a non-killing Joker toxin, you ask? Um.... I'll get back to you on that...). Anyway, Sonia Branch/Zucco pays for the funerals since Dick is basically poor now, and Babs also talks to Dick after Sonia leaves, she tells him to ignore whatever Joker said about people making him weak, but he thinks Joker let people live so they could leave him when it was all said and done. That makes sense I guess(yeah, that MUST be why he has a magic non-killing Joker toxin... I guess...). Of course, Dick tells Babs he's okay(HE'S FINE!!!!!) as Damian watches on behind a tree... yep. When some guys eventually head back to Amusement Mile to recover whatever they can, Nightwing springs into action and beats them senseless until Damian stops him. The two free run around the city, doing hardcore parkour cause that's what Robin's do baby(much like JT and I would do)! Damian tells Dick that others are inept but he isn't and he knows Dick isn't fine(but he's said he's fine. Like 100 times!), as he's followed him all week. Dick says he's supposed to be the rock (Finally!!!) and bounce back, but Damian says he got burned by people he trusts, it happens, and he shouldn't let that change him. Dick agrees with Damian and they decide to hang out more often, and play video games, because Dick's basically a giant kid and Damian is basically a tiny man. The issue comes to a close with an old man known as The Dealer (remember him from the Black Mirror story?)(I do, thanks for asking!) and he's given something the thugs from earlier found, as he pulls out Dick's old Flying Grayson costume with a Joker face drawn on it.

Thoughts: This issue.... was SO weird. It wasn't a bad story but it's weird because nothing happened...and everything happened(yeah, that makes sense, Shakespeare...). Dick lost his circus, amusement mile, his money, and The Dealer may know who he is now... yet, the whole issue could be summed up with "Dick said he was okay, Damian said he wasn't, they talked and now Dick is fine."(um, why didn't you just say that in the first place?!) Also, Damian followed Dick for like a week, and Dick was unaware, which makes him a REALLY shitty detective. I mean I know he was out of it from losing everything but come on.... he was BATMAN. At least show him looking over his shoulder in a panel or two, or even have him say something like, I knew you were there Damian but I didn't confront you because blah blah blah, the point is, it just made Dick look like a really bad detective since he doesn't even know when he's being followed for a week, by a kid nonetheless(thank you! That bugged me so much!). That aside, I didn't dislike this issue, and it set up a few storylines but I still felt like the issue was just slow and really not that memorable.(agreed all the way around.)

Nightwing: You're pretty smart for a kid, you know that?
Robin: "For a kid"?