Hey guys, JT here(and X too! Move over JT, I'm crashing this here review!!!) with the last review of the comic week before the new books drop tomorrow. Today's review, is Scarlet Spider(Ugh, why did I decide to crash THIS one?!), and it's actually less of a review and more of a rant(Sweet!  I love rants!), so if you're looking for an in-depth review, you shan't find one here(That's par for the course with you, JT! :P). 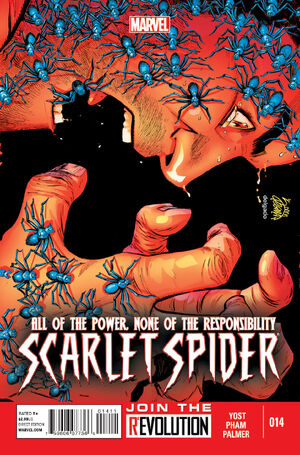 Summary: Aracely ran from the wolves and ran into a street gang called the Sharks, they fought the Wolves by shooting them(How else would you expect to fight werewolves?!)... Meanwhile, Kaine had a dream while dying and after fighting the fact that he's a monster, he finally gives in and agrees he's a monster, giving himself to "The Other"(UGH!!). The issue ends with Kaine sprouting forth from a cocoon with no facial hair, costume or whatever, just looking weird, claws extended and with six eyes.

Thoughts: And I thought Batman and Robin was bad.... X complains about the books he had being mediocre and I get this(Yes, I complained about the mediocre books I had this week... But at least none were painfully bad like this one!). Really? Before I jump into "The Other" stuff, let me say this. Houston must have the baddest ass ghettos ever... because not one person in the Shark gang seemed to be shocked or afraid that they were fighting legitimate werewolves... I mean, I'm from Detroit, and I don't know much about gangs, but I know a bit, and I know that if a gang was confronted by an honest to god werewolf... they probably wouldn't provoke it into a fight(See, I'm from New York and yes, we WOULD provoke a fight with a werewolf! On sight, actually! Furry bastards...). But not the Sharks.... they went to war for Aracely... and I guess Street Cred(Street Cred IS important...)... I was waiting for one of them to say "TEAM EDWARD, MUH'F***A!!!!"(HA!! I love that line...) But... I digress...

For those who don't know, this "Other" crap is from a story called Spider-Man: The Other(Makes sense), in which Peter Parker died and was reborn with new powers or something equally stupid. Anyway, it's generally regarded as a horrible story that's pretty much ignored except when Kaine returned in Spider Island, he told Pete he was reborn with new powers. Anyway, all of that aside, I don't think anyone was lobbying for the return of The Other. Especially considering as JW pointed out, Kaine's been struggling with his "monster" side for the better part of this series, so him finally moving past it, only to literally become a monster in the next issue felt like a slap in the face. I'm hoping he turns back to Kaine soon(Word!), like at the end of the next issue soon, but it really hurt the flow of the character development for me, I mean even if he is becoming a monster to protect Aracely... Kaine seemed pretty capable before he had to give in the The Other. I wasn't a Chris Yost fan before this series due to his subpar run (in my opinion) on Red Robin, but I gave this series a chance and was happy to see how well Yost did with the series and Kaine's character, but if this is gonna be a constant struggle of "I'M A MONSTER!!! I'M A BIG RED MONSTER!!!"(It's Kaine!!) I can't see myself sticking with this series, especially considering the return of The Other...ugh(Damn, one bad issue and JT is all, "I'm out!"). So yeah, all in all, not a fan of this issue or the developments here, here's hoping things go back to how they were two issues ago, as soon as possible.

Kaine: NO! (I said the same thing when I saw The Other.)