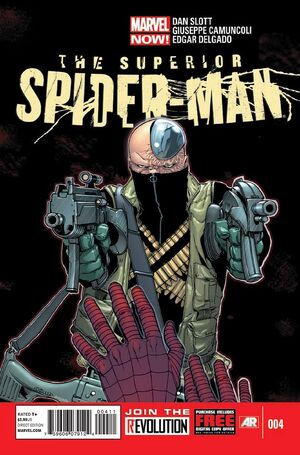 Summary: This issues starts off with The Superior Spider-Man saying how much better he's done than his predecessor, managing to stop even more crimes than Spidey by using his Spider-Bots and catching crimes in areas that Peter didn't patrol, as well as getting criminals to turn themselves in because their afraid of what he's done to Boomerang and Vulture. Otto does shirk his responsibilities when a fire is reported by one of his bots, he tells them to report it to the fire department, as he has somewhere to be. Peter tries to tell him to go back(why should he, it's not his job!), but instead Otto heads to Aunt May's therapy, and she's happy he's turned his life around and is showing up more(Poor Peter... His decrepit aunt likes Ock more...). He pulls a doctor to the side and asks when Aunt May will walk again but he says surgery isn't good for someone her age, and she'll use the cane for the rest of her life. Doc, obviously perturbed, heads to Horizon and invents a device that hooks up to your spine and brain, which allows the injured to walk again, and he wants to test on Aunt May. Obviously, this doesn't fly with Modell, but Parker says he's a doctor, to which after a quick mind scan he realizes he's not, as he's one credit short. A livid Parker storms off, eagerly wanting to be known as "Doctor", once again, so he heads to back to college to get his last credit! Ock's Advanced Physics class is actually taught by an old classmate of his, who he calls a buffoon(cause he is!). Meanwhile, the completely emotional sociopath known as Massacre, manages to break out of Ravencroft Asylum, leaving many dead in his wake. When the Superior Spider-Man finds out, and that it's Peter's fault for not taking him down, he heads after Massacre, while the emotionless villain continues his killing streak. Spidey heads to meet Uatu Jackson (Who I'm starting to think is Miles Morales in the 616...)(I sure hope that's not true, because JT will never let us hear the end of it if it is...) and asks to use his facial recognition software that he let the Wraith use, telling Uatu he can keep his secret. Just when things can't get even more wild, the issue comes to a close as we see someone say he can keep people safe from the Spider, as he knows all of his tricks and knows how to end him, as we see the return of The Green Goblin(YEAH!!!)!

Thoughts: Holy crap this issue was great. First things first, I love the character of Massacre. Dan Slott has done a lot with Spidey, but I think Massacre may have been one of his best ideas. His ambivalence to killing, his weird kind of sense of humor in this issue, I just love that character(Is it because you see yourself in him, JT?  Is it!?). So Massacre is always a plus in my book, but you add in Dr. Octopus being pissed he's no longer a Doctor, returning to school, and taking a CLASS while being Peter Parker... if that's not ripe for comedy (and him saving the class eventually) then I don't know what is. Now Doc making a pseudo skeleton for Aunt May, while creepy and sweet at the same time(the best kind of creepy!), was also great, especially with him wanting to test it on his Aunt, makes it look like Peter is slipping into the deep end, I can easily see Peter coming back to no job, no Avengers and... a Doctorate? Plus, Gobby is back, and Gobby vs. Superior Spidey.... words can't explain how excited I am for that. If there were any slow parts of this issue, It'd probably have been the stuff with Uatu, but everything else was so spot on, I can't complain(sure you can! I would!!).

Superior Spider-Man: I give you my word Jameson. I will end this man!