Hey everyone, JT here with my first review, and it's basically one of my books, considering I've reviewed every issue of this series so far. So yeah, to say this is one of my favorite series at the moment would be a very accurate statement. Anyway, we left off with Mystique seeing Young Scott online and getting ready to pursue him, let's see how she does. 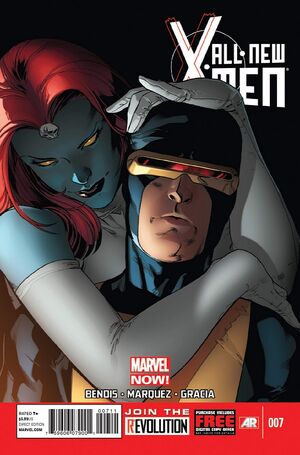 Summary: We start things off with Young Cyclops heading to a bank and finding a safe deposit box he had, I guess to see if he still had money in it. He gets into it with no key since an employee recognizes him and she's basically a mutant groupie. Scott looks in his safe deposit box and pulls out some cash, his old red block-pair of glasses, some other less important things and an envelope, but when he's about to leave he's confronted by Wolverine, and the Canucklehead drags him out of the bank, then asks if he's hungry. Scott tells Wolverine to leave him alone, and we find out Wolverine is actually Mystique, who introduces herself to Scott as Raven, a friend of Charles Xavier. Scott is taken aback by Raven's shape-shifting but the two eventually go off and talk. Did anyone else notice that Mystqiue's shape-shifting form looks EXACTLY like Alisha from the TV Show "Misfits"? She even had the little beauty mark thing on her lip. Anyway, Mystique uses her silver tongue of persuasion to convince Scott to go back and lead his team, and eventually somehow shut down both Logan and Present Cyclops' school, saying that's not what Xavier would want and it's not what Scott fought for. Mystique then hightails it out of there and Logan shows up to take Cyclops back to the school. Cyclops asks why he hasn't killed him yet, since Logan clearly wants to, referring to both himself and present Cyclops, but he says he's learned that killing is usually the easy way out, and not always the right way, something he learned from Prof. X. The issue ends soon after as Cyclops arrives back at the school and gives the envelope from the safety deposit box to Jean and walks away, as she cries upon seeing their "Save the Date" wedding invitations.

Thoughts: Well, this was a pretty interesting issue. I enjoyed the stuff with Cyclops and Mystique, I always enjoy her mind games, as she's one of the best, and preying on a young Scott to basically keep him and the two X-Schools busy while she does what she wants was a great idea. I also liked the humor here, with her knowing Logan so well that the two asked Cyclops the same questions when confronting him, plus I marked out from seeing Alisha of Misfits, being a fan of that show. The things I didn't really care for were mainly drill Sargent Kitty Pryde leading the team in push-ups and her little argument with Past-Iceman, I could've done without that, and so far Bobby has been more annoying than anything, so he either needs to find a way to be useful and entertaining or stick to the background. I also don't get why Jean was crying at the end, I mean she already knew she married Scott.... she's seen her old memories basically and relived her life thanks to Beast sharing what he knew, so I don't get why that surprised her. All in all this was a good issue, not much happened but Mystique being back and playing mind games is always a plus in my book. Plus, Misfits.... so yeah.

Wolverine: This means that whatever security guard school you graduated from doesn't mean a damn because Capt. America told me that this means you do what I say.