Hey everyone, JT here with my second review of the week, Jeff Lemire's Green Arrow. I haven't followed this series since like issue three or so, but I figured I'd give it a chance with Lemire taking over. He claims this issue will read kind of like a number one, so let's see if Green Arrow's comic can be as good as his TV Show. 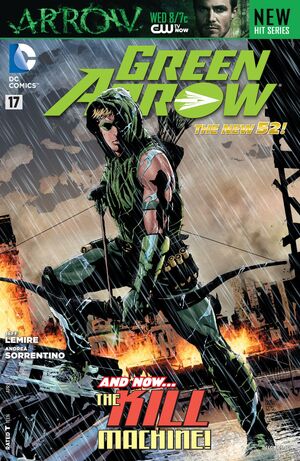 Summary: This issue starts off with Oliver Queen, poor and beaten, walking through a desert in his Green Arrow gear, proclaiming that this whole time he was nothing but a rich and spoiled kid playing superhero, but he's a no one, and he's going to die alone. We jump back three weeks to see Ollie finding out that Queen Industries has been stolen by Stellmoor International, and Oliver wants answers. He confronts Emerson, his dad's best friend who was to hold the company until Oliver was ready, but he basically says the company suffered because Emerson was so busy having to watch after Oliver and his decisions, and how he couldn't even run Q-core, a pet project he gave Ollie to see if he was ready. Emerson hints that Queen Industries is not the only legacy that Robert Queen left Oliver, but before he can tell him, he's suddenly shot in the back with an arrow through a window. The arrow has a rope connected to it, and it's pulls back, yanking Emerson out of the window, which of course makes it look like an enraged Oliver Queen pushed him out of the window. The Security guards try to subdue Ollie, but he escapes and is ready to suit up, so he calls his friends at Q-Core, Jax and Naomi (they know he's Green Arrow) and tells them to get his suit and arrows ready, but they say "He's making us do this." and suddenly Q-Core explodes, with Jax, Naomi, and other employees in there. Oliver doesn't have time to grieve since he wants revenge, so he heads to his safehouse and gears up, when suddenly he's attacked in the base by an archer who introduces himself as Komodo. He's pretty much superior (Shout out to Doc Ock!) in every way and schools Oliver. The fight takes the two to the roof and Komodo is about to put Oliver out of his misery, causing him to die a poor, friendless man, when suddenly Komodo is tackled and subdued by a man named Magnus. He says Komodo and The Others have gotten out of line, and he throws something in Komodo's eyes that blind him long enough for Magnus to help Oliver up. The issue comes to a close as we see Magnus, a man who has had both of his eyes cut out, and he tells Oliver that he shouldn't be there, as he was never supposed to leave the island.

Thoughts: Jeff Lemire must be a fan of Fraction's Hawkeye series, cause this kind of seemed like that. The little boxes that zoom in on actions during fights, the art style was very similar to Hawkeye, and that's not a bad thing. If you're gonna emulate a series, that's not a bad one to do. Don't get me wrong though, Lemire wrote this issue very well, I enjoyed the scene of Oliver being pissed about losing everything and basically finding out via the news. I also like the mystery surrounding the island now, as well as what else the Queen Legacy had left for Oliver. But Lemire did what he said he would. he basically gutted this series, he took Ollie's friends, his business, his money and his pride all in the span of one issue, and Oliver is a character that's more interesting without those things, so seeing him bounce back will be fun to say the least. And Komodo looks to be a interesting villain, him taking down Oliver was child's play, so I'm definitely excited to see more of him in the near future.

Komodo: Just look at you... you have no idea what you could have been, do you?