Red Hood and The Outlaws #17

Hey guys, JT here(and X! Yep, I'm crashing another review!!) with my second review of the week, and it's Red Hood and the Outlaws! Now you all know how I feel about Lobdell's work as of late(hint: it sucks!!!), but I figured with him on his way out(huzzah!!!) and James Tynion IV on his way in, I'll read the last few issues as I await Tynion's work, so let's see how things work for Jason after the events of Death of The Family. 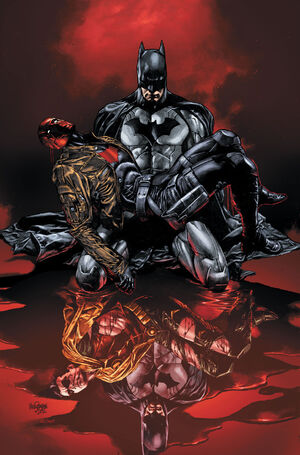 Summary: This issue basically focused on Jason dealing with the fallout of the recent Joker events(Huh, that makes sense... In a Lobdell book!?  The hell?!?). He sends an automated car for Roy and Kory, to bring them to meet with him at Wayne Manor, as he goes around the house tying up loose ends. Jason talks to Damian for a bit about how he knows how Damian feels, trying to live up to the Robin legacy and basically tries to bond but Damian(his son!!!!!) doesn't wanna hear it from Jason and brushes him off. Roy and Kory arrive and are happy to see Jason, with Kory hugging Jason and flying him into the air while Damian and Roy waste no time insulting each other. Jason invites Kory in but she thinks she should wait outside, obviously not wanting to run into Dick, who confronts Jason upon his entrance and tells him to promise he'll watch over Starfire, to which Jason agrees(what is she, a stray cat or something?). From there Jason runs into Bruce in the Batcave, and tells Bruce that Superman said Bruce vouched for him, to which Bruce says he doesn't approve of Jason's methods but he can't argue with his results(Bruce would never say that!). Jason then asks Bruce is Joker was right about creating him(dammit Lobdell, stop with this already!), to which Bruce says Joker didn't make him, neither did Bruce, Jason made himself, which Jason seemingly takes to heart. Outside, Arsenal and Robin have finally stopped attacking each other, so Roy throws a football to Damian, and he blocks it, not knowing how to play catch...even though he played with Bruce in Batman and Robin... but... you know Lobdell doesn't read other people's stuff(HA! He took the joke right out of my mouth.). Jason also runs into Alfred, who basically tells him he always has a place in that home and he's always welcome there. As Jason leaves he finally puts on his helmet(big mistake), which he'd recovered from the batcave, and suddenly a hologram message from the Joker pops up on it. He says Jason played a joke on The Joker by coming back from the dead, and he's not laughing. He says since Jason is so determined to be his own man, he'll start him with a clean slate, and Jason's mask releases some kind of acid that burns Jason's face, causing him to scream which brings Arsenal, Starfire, Robin, Batman and Alfred running. The issue ends as Batman removes Jason's helmet, showing his face to be badly burned as a result of The Joker getting the last laugh(ugh...).

Thoughts: FINALLY! This is what I've wanted since Jason came back. We've seen Jason run into the family a few times, his quick team-up with Batman (Dick) and Robin pre-New 52, him helping out during Court of Owls and the Death of the Family storylines, although he mostly sat in the background with his arms folded, and his awesome reuniting with the other three Robins last year, right before Damian decided to challenge each Robin to prove he was the best. But this was the first time we got Jason at the manor, feeling like a part of the family. He got to play big brother to Damian, he had a talk with Dick and we got a bit more of the Dick/Starfire mystery fleshed out, he finally had a talk with Bruce, no helmet, no cowl, just Bruce and Jason talking, and Bruce, in his own way, kind of supported Jason. I will say it seemed kind of uncharacteristic for Bruce to say "I may not agree with your methods, but I can't argue with the results." to Jason, that seems more like something Bruce would think but never say(thank you!), but that aside, I enjoyed them finally talking. And the thing I've wanted since Jason came back after Under The Hood, we finally got to see him talking with Alfred, which was a great moment between those two when Alfred said with everything that's happened, Jason is still always welcome there(Damned Alfred! That's not his house, who's he to just invite people to live there!?). That's why I enjoyed this comic. I even enjoyed the stuff with Damian and Arsenal(not me, it didn't click like Steph and Damian, it felt kind of forced), as well as Joker getting the last laugh because it fits his character. I knew there was a possibility something would happen to Jason's face due to future solicitations and the fact Joker painted in his mask a few issues back, and while I'd hate if Jason is disfigured now or has to wear that helmet all the time now, so much stuff I liked happened in this issue, it's easy to ignore that for now and see what happens(check out JT! What an optimist!). All in all, I was happy to see Jason be a member of the family, and here's hoping it leads to him popping up more in Nightwing, Batman, and other things that make the character seem less like the black sheep of the group(But that's who he is, the black sheep of the group! I don't know if I'd want to see Jason turning into a mini version of Dick or Tim. But yeah, for a Lobdell comic, this was WAY better than I would have expected!).