Injustice: Gods Among Us #1

Hey Todd Squad, JT here with my final review of the week, and it looks to be an interesting one. For those not in the know, DC Comics has a fantastic looking fighting game this April called Injustice: Gods Among Us, and this comic works as the prequel for that series, since the game will have a vastly different DCU than the one we currently know, so let's see what kind of world we'll be dealing with.

Injustice: Gods Among Us #1 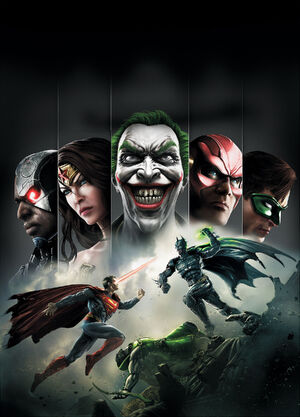 Summary: This issue starts things off with Clark waking up at night excited because he's heard two heartbeats coming from Lois, so she's obviously pregnant. An excited Superman wants to keep Lois home and safe but Lois being the stubborn woman she is says she'll be fine and Superman agrees, knowing how tough Lois is. Superman wastes no time finding Batman, who is in Metropolis to investigate something for STAR Labs, and tells him the good news, and even asks Bruce to be the future Son of Steel's godfather. From there we jump over to the docks to see a story Lois is investigating with Jimmy Olsen, when suddenly Jimmy is shot through the lens of his camera and killed by none other than The Joker. Joker and Harley kidnap Lois, and when Superman eventually finds Jimmy dead the next morning and a Joker playing card, he finds Batman and says he can't find Lois. Batman, who was investigating stolen Kryptonite from STAR Labs, who had been using it to see if they could cure diseases with it, calls in the Justice League to help find Lois, and we see Flash, Cyborg, Wonder Woman, Green Arrow and the like checking in. Flash covers quick ground and lead encased places and comes across the body of the Scarecrow, who looks to have been killed with Joker Toxin. At the docks, Wonder Woman uses her lasso on one of Joker's Henchmen to find out he and Harley hijacked a Submarine, which Superman quickly finds and places on the beach. He rips open the submarine and finds Joker and Harley dressed in scrubs, seemingly operating on Lois. Superman drops to his knees because there's Kryptonite venting through the air ducts and Superman is surprised to see Doomsday there as well (?!) Superman, thinking of protecting Lois and the baby (which catches Harley off guard) attacks Doomsday and flies him into the sky as Joker and Harley try to escape but their caught by Green Lantern, Wonder Woman, Flash and Batman. Batman goes to investigate the Submarine but stops when he notices Scarecrow's Fear Toxin is in the submarine. Bats asks Joker where Lois is, and he says he operated on her, and she's the trigger to the Submarine's warhead (which is missing), and that when her heart stops, so will every heart in Metropolis. Batman winders why her heart would stop and puts together that Joker mixed his the Scarecrow toxin with Kryptonite so that it could enter Superman's lungs. He calls Superman, telling him to stop and whatever he was seeing wasn't real, and Supes is able to stop himself just as he realizes he's flown Lois into space and stopped her breathing, because he'd mistakenly thought she was Doomsday. Joker smiles, asking Batman if he knew Lois was pregnant, as Batman spins around and clocks Joker, and suddenly the Warhead, which was hidden in Metropolis explodes, taking the city with it, as Batman, wonder Woman, Flash, Green Lantern, Joker and Harley look on at the explosion.

Thoughts: Now thats how you do a prequel. Holy hell this issue had a lot to it. I saw Lois dying coming a mile away after the pregnancy thing was announced, but I didn't expect her to die at Superman's hands. That was an excellent twist, because for all intents and purposes, he's going to kill Joker now. He has to, and of course Bats won't let him, so there's the dissension. Plus, not only did Superman lose Lois and the baby, but he also lost his buddy Jimmy Olsen AND Metropolis. Superman is directly responsible for the Death of Metropolis and his wife and kid, thanks to The Joker... That story kinda made his story in Death of the Family look small by comparison. I really enjoyed this issue though, It was great, everything worked, the characters felt genuine, and Joker beat Superman... and it MADE SENSE... now we get to see Superman's descent into madness, which should be fun.

The Flash: Sorry. I know carrying you is a bit... awkward but it really is the quickest way.
Batman: Just go fast enough that no one can see us.