One review on tap for tonight, and it's a big one.  Batman #17, the finale to Scott Snyder's Joker storyline.  Last issue Joker electrocuted Batman, all while collecting the various members of the Bat-family.  Now, we discover what Joker's been up to, and more importantly, what the hell is on those silver platters?!?

Summary: This issue kicks off with Batman waking up tied to a chair and seeing his four Robins and Batgirl tied up around a massive dinner table, in what looks to be a part of the Batcave.  Each of Batman's allies have a silver platter in front of them, and are wearing hoods...  Hmm...  Next, Joker calls Alfred into the room and we see that Alfred had been subjected to some Joker toxin and had been Joker-ized.  Bats is relieved to see that Alfred is alive, regardless of his current complexion.  Alfred removes the hoods of the various Bat-family members and we see that their faces are adorned with bloody bandages.  Finally, Joker lifts the platters and under the platters are the faces of the various Bat-family members(!!).  It should go without saying that Batman is a bit pissed off about that.  Joker tells Bats that he could stand at anytime, but doing so with set the various members of the Bat-family ablaze, since Joker had doused the room with gasoline and Batman's chair was sitting on flints.  From there, Joker rambles on and on about how Bats wants the Bat-family out of the way, and hopes that deep down Joker would be the man to eliminate them.  Joker then produces a little book that he claims was a hit list that he took from the Batcave, a hit list that told him how to go after each member of the Bat-family.  Having had enough, Bats breaks free of his chair, setting all of the Bat-family members on fire, much to Joker's delight.  Unfortunately for Mistah J, Batman reveals that there was a large body of water above the caves, and blows the roof up, letting the water pour in and put out the fire.  Joker makes a run for it and Batman rushes over to Damian, taking the bandages off to reveal... nothing...  Damian, and all of the other members of the Bat-family, still have their faces, the whole face removing claims were nothing more than a joke.  Nightwing tells Bats to go after Joker, so Bats leaves his allies behind...  At which time they are enveloped in a mess of Joker toxin and begin to brawl with each other.  As for Bats, he manages to catch up to Joker and puts a bit of a beating on the crazed clown.  Joker tells Batman that he had better get back to the Bat-family, since he had poisoned them with Joker toxin and they were probably tearing each other apart.  Batman disregards that, telling Joker he trusts that they can take care of themselves(which they actually do by breaking free of the drug's influence).  Joker makes a break for it and almost runs off a watery cliff, but Batman pulls him back, since he wasn't through with Joker just yet...  It's then that Batman reveals that he knew that Joker NEVER knew the secret identities of the Bat-family members, because Joker never wanted to know.  He simply enjoyed playing dress-up and facing off against Batman, not Bruce Wayne, or Dick Grayson, or any of the rest.  It was always Batman vs Joker.  Batman goes on to tell Joker that he was finished playing Joker's games and spent the year Joker was away digging into Joker's part, his REAL past, and had discovered Joker's real name.  Before Batman can destroy Joker's fantasy world once and for all by saying Joker's real name, Joker shocks Batman with his joy-buzzer and throws himself off the cliff into the waters below, leaving nothing but the little book that he claimed had all of Batman's secrets.  Bats picks up the book and opens it to find...  Yep, nothing but blank pages.  And that's that.  The next day Alfred wakes up in Wayne Manor and Bruce tells him that he knew Joker would never broach the subject of Bruce Wayne.  How does he know that?  Because Bats once visited Joker in Arkham, AS Bruce, and Joker acted oblivious to him, pretending that he wasn't even there.  Bruce also tells Alfred that he had invited the other members of the Bat-family over to discuss what had gone down.  However, everybody ends up texting Bruce to tell him they couldn't make it, apparently miffed at Bats for something Joker told them before Bats regained consciousness...  With that, Bruce returns to the Cave(where we discover he never knew Joker's identity after all) alone.

Thoughts: This was a VERY interesting comic book...  I mean, the writing?  Fantastic.  The dialogue was great, and I DID enjoy the story.  The art?  Wonderful.  Everybody looked and "sounded" right.  But after putting this comic down I couldn't shake the feeling that SOMETHING was missing...  This was a very good little Joker tale(the parts in JUST Batman at least).  But it wasn't REALLY a big event.  It ended with Joker falling to his death(again) and the Bat-family being a bit mad at Bats(again).  Nothing event-worthy really went down.  There was no huge revelation.  There was no shocking death(which is fine by me, actually. I hate senseless deaths).  In the end, Joker didn't know who Batman really was(or better, he didn't care), while Batman didn't know Joker's real name.  The only mystery here is what Joker said to the Bat-family members while Bats was out cold, since it seemed to piss them all off so badly.  Which kind of bugs me, because why in the world would they let Joker get under their skin after all these years!?  Speaking of things that kind of bug me, there's the issue of the secret identities and Joker's knowledge of them...  I've always been in the camp that said that Joker HAD to know Batman's secret identity, but didn't care, since he didn't care about Bruce Wayne, only Batman.  Snyder KIND of agrees with that train of thought, but with a caveat...  He states definitively that Joker DOESN'T care about the man under the mask, only about the mask itself.  Batman is his beloved enemy, NOT Bruce Wayne.  But Snyder takes it a step further and seems to be stating that Joker doesn't know that Batman and Bruce are one and the same...  After this storyline, I don't see how that can be...  Hell, Scott Lobdell basically said that Joker definitely knew Jason Todd was Robin(in Red Hood and the Outlaws #0), and that he made sure Jason was taken in by Bruce Wayne!  Throw in Joker's attack on Haly's Circus, which HAD to be aimed at Dick Grayson, not Nightwing, and it seems that Joker has to know...  I mean, how can he not!?  On top of all that was the whole face-cutting thing...  Why did Joker pretend to cut off the faces of the Bat-family members?  What purpose did that serve?  I mean, why didn't Joker REALLY cut their faces off?  He had the time and opportunity, so there really doesn't seem to be a reason for him to not have sliced off their faces.  Yeah, I know it COULDN'T happen, but really, it probably should have happened, especially since Joker had planned on them all dying anyway!  So yeah, there were a few things here that definitely did bug me.  But then, on the other hand, this comic was a blast to read.  The pacing was great.  Batman's plan of turning the tables on Joker at the end was inspired.  There WAS a lot of good here.  But still, there was just something missing... 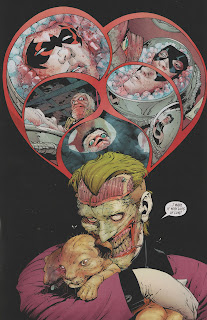