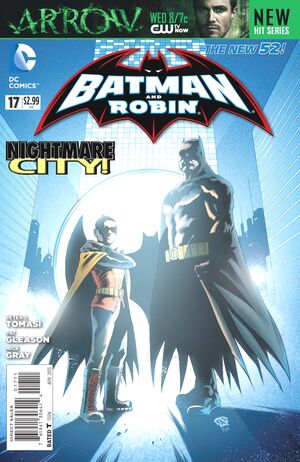 Summary: So this issue is basically three stories about the three main characters, Bruce, Damian and Alfred, having dreams about the recent events in their lives. First up we see Damian's dream, where his mom, Nightwing, Joker, Red Hood, and Nobody are all drowning as Damian looks on from a submarine. Damian is approached by another Damian, showing the two sides of him, as he argues with himself about why he kept a batarang, as it was Bruce's way of showing him two sides of himself, like Damian did, as he holds Bruce's head, cowl attached in his hands. He suddenly notices Alfred drowning as well as the other Damian says there's nothing any of them (the family) can teach him anymore. Damian screams Alfred's name while watching him drown and wakes up. When he wakes up he sees a Robin in his room and he and Titus the Dog follow it and it leads them to Bruce's study as a giant bat is sucking the blood out of his neck, and Bruce asks Damian to join them, so Damian screams and wakes up again. Alfred's dream consists of helping Thomas and Martha Wayne before they went to the theater, then he goes into the Batcave door which is the fridge (?) and asks Bruce and Damian if they need help, and he arrives in the basement to see the Bat-Family all Jokerized and Joker swinging a hammer. Alfred tells Joker to surrender and pulls out a shotgun, but Joker says make me, so Alfred blows his head off... well alrighty. Alfred then wakes up from his dream, smiles and goes back to sleep. Bruce's dream consists of him making a paper boat which turns into a real boat and his parents fall off of it, because why not. (This is the part where I just wanna finish the review) Also, Damian and the rest of the crew drown or something. Bat's boat is then pursued by his Rogue galley and he says he doesn't need them as a giant whale comes up and eats his boat and says "HA HA HA HA HA!" as he jumps off of it and is saved by Damian pulling him out of the water. Bruce wakes up and goes to check on Damian and the issue ends as we see Damian dreaming about being on patrol with his father and the two of them ending the night sitting on top of a church and watching the sunrise.

Thoughts: This comic was weird as hell... I... I don't... have words. I could try to say this was their subconscious telling each of them what they secretly wanted and such but I'm not a philosophy major... I'm a guy that reads comics for enjoyment and reviews them for the same reason. So... yeah... Alfred shooting Joker and the artwork is the only reason this got any points.

Alfred: I told you that was enough. (I know Alfred... but I bought this issue anyway...)