Hey comic readers, JT here after a week off from the flu, with what is my first post of my official second year posting here at the X-Man Comic Blog. So, what better way to give you a post about Superior Spider-Man by the Superior Blogger? :P So let's do this. 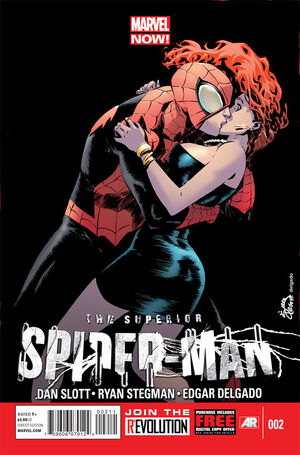 Summary: This issue starts things off with Peter having to watch on as Superior Spidey is commended by and shakes hands with Mayor J. Jonah Jameson, as Jameson says Spidey was wrong about him and maybe he was wrong about Spidey. It was crazy-banana-pants, as Peter referred to it. Ya know what's also crazy-banana-pants? That stupid phrase. Anyway, Carlie Cooper and MJ are having a meeting of the lady Ex-Parker Pack, and MJ tells Carlie she thinks her and Peter may get back together, which surprises Carlie. From there we see multiple lunches and dates "with the Watson woman", and even though Peter's consciousness has to watch these occurrences, luckily, Doc Parker continues to strike out. One thing Peter does give Otto credit for, is after getting tired of interruptions while with MJ, Doc Parker creates a Spider-Bot that creates other Spider-Bots that go around the town on his usual routes and act as cameras, which Ock can check with his Patrol App, allowing him to see if there are crimes around without swinging around the city. On their fourth date, Doc realizes that the danger aspect may be why MJ wouldn't let him swing her way, so he decides to suit up and give her a web ride (no pun intended) home, but he's still put on ice, since MJ has a house guest, Carlie Cooper. Turns out Carlie has been staying with MJ since she was shot, so Doc Parker takes off after wishing the ladies a good night. Ock realizes he can be with MJ anytime he wants, by accessing Peter's memories, which is as disgusting as it sounds. We see Ock the next morning has slept great, so draw your own conclusions, and he decides that now that he's over MJ, he'll hit on anything that moves, including Peter's co-worker, Sajani. Doc Parker's fun is cut short when his Spiderbot picks up that there are little Vultures breaking up MJ's club, and he heads down there with Peter following close behind. On the way there, they encounter a mugging and Peter thinks they should stop, but Ock calls it a petty mugging and continues to swing towards MJ's, just in time to see her dropped by one of the Vultures, as they take off with whatever they came to steal from the Vulture's former hideout. Ock gets ready to save MJ and Peter shouts not to use a web-line, due to what happened with Gwen Stacy, and Ock, possibly hearing Peter, uses a Web-net instead, saving MJ. MJ is grateful and tries to kiss Superior Spidey but surprisingly Doc Parker stops her, saying that he realizes promised to keep her safe, and he can't do that if he's with her, so he has to move on, which surprises Peter and MJ. The issue comes to a close with MJ telling Carlie, and Carlie saying it's almost like Peter is a different person, causing her to think about when Doctor Octopus told her he was Peter Parker, and Carlie says she has a mystery to solve.

Thoughts: First things first, Mary Jane looks stunning on that cover, excellent work by the cover artist here, Edgar Delgado. Now a lot happened here, Peter being back is fine, but he's doing a lot of complaining, which makes sense but it really diminishes the point in having him there, I say have him pop up from time to time or talk less, he really takes away the attention from Ock. Now, I enjoyed seeing Ock strike out a lot, and him using Pete's memories of MJ was creepy as hell but I liked it because it gave him a way to win without winning and without people complaining about him "raping" Mary Jane. I also really enjoyed his creation of his Spider-Bots and app, which works to his advantage and really makes sense for the character. I'm also thinking that him not stopping that mugging will definitely come back to bite him in the ass. As for his first big villain being the Vulture, I'm kinda meh about that but I'm curious to see where it goes from here. And lastly, I'm glad Carlie is investigating Peter due to what Ock said, If anything I'm surprised it took her this long.

Doc Parker: No. Everything's proceeding according to plan.
Peter Parker: He's saying super villain stuff! How can no one see through this?!