Hey X-Maniacs, Happy TGIF, It's Friday which means this is JT, your resident "Cyclops was right" fan, as well as the half of the blogging team that believes that Emma > Jean, so of course any book with both Scott and Emma is going to be going through me. So, that's my convoluted way of saying, let's check out the first issue (again) of Uncanny X-Men. 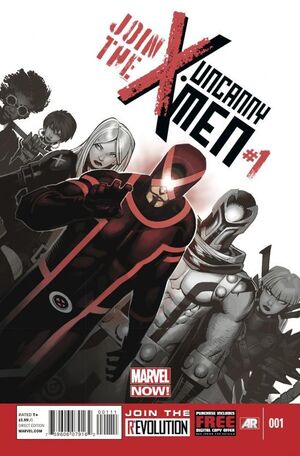 Summary: This issue kicks things off with Maria Hill being told by Coulson that they have a visitor that's requested to meet with her personally. She's wary and agrees to meet with him after being told he was thoroughly checked and they're meeting with a bunch of reinforcements outside the room, including Nick Fury Jr. and Coulson. When Hill meets with the Mystery Man, he tells her that he's come to her because she has no dog in the fight, she's neutral in the Mutant Revolution. The man explains by showing her how many new mutants have popped up already, and explains that the only person Hill needs to worry about is Cyclops, the self-appointed face of the Mutant Revolution. He tells Hill that Cyclops' powers aren't working anymore and that he's trying to retrain himself before anyone can find out. He explains that Cyclops has already put together a team including Emma Frost, Magneto, Magik, and two new mutants, an Australian girl that can stop time named Tempus, and a healer that hasn't picked his code name yet. When saving another new mutant by the name of Fabio Medina, the group is attacked by a group of Sentinels, and Scott manages to take them all down after telling having the team stand behind him. According to the mystery man, Scott unleashed a blast that was basically a lucky shot and destroyed the Sentinel's, but since he can't control he powers he could've easily hit a civilian or a teammate. The mystery man tells Hill that she's trying to kill Summers, but she says she isn't, he doesn't believe her but says if she does she'll make him a Martyr, what they need to do is expose him as a broken man, both spiritually and physically. He says Scott should be in jail, he should be healing but instead he thinks he'll be forgiven of his sins by saving every mutant he can find. Hill asks the mystery man why he's there then, revealing the group's traitor to be none other than Magneto. He says he and Xavier rarely agreed, but they shared a dream, and Scott killed Xavier in front of him and destroyed his powers, making him a shell of what he was. He says Scott isn't the face of the future, he's a murderer and he needs to be revealed by self-destructing in public, and Magneto is there to make that happen.

Thoughts: This was an interesting way to start the series in my opinion, I figured they'd tease the traitor for a while, kind of like they did in Runaways, and then reveal who it was. So to start things off with Magneto being the traitor was a bit of a surprise, but I'd already figured it would be him or Emma every since they started showing teasers saying there was a traitor. That aside, I guess the big thing of this issue was they showed Magneto talking to Hill and he was seated for most of the issue and also bald, so some people (like a writer at Bleeding Cool) thought the reveal was a great twist because they made it seem like Xavier.... which is weird because at no point did I ever think this was Xavier.When Hill enters the room he takes a piece of metal out of his mouth and she gets afraid. Why would she be afraid of Xavier in the first place? Also, the fact he referred to Magneto as the "Former Master of Magnetism" when the only people who know his power is screwy at the moment are his teammates made it obvious, and of course anyone who reads Uncanny Avengers knows that Xavier isn't in much condition to do a damn thing now... so yeah, the "twist" never really lured me in, so I was surprised it did for some people. Anyway, that aside, this was a pretty average issue, it was kind of just part two to seeing Scott's team a few issues back in All New X-Men, and outside of Erik's betrayal, nothing memorable happened here. Don't get me wrong, this issue wasn't bad, I guess I just expected more.