Hey everyone, with the recent news that one of my favorite ongoing series, Avengers Academy, will be canceled at issue #39, I decided today I would review the most recent issue of Avengers Academy today. Hopefully, the AA crew will get a team book in the Marvel NOW era, but for now I'll enjoy the team for as long as I can. 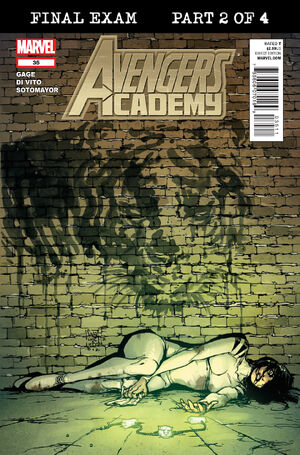 Summary: We start things off with Finesse, X-23, Reptil, White Tiger and Lightspeed trying to figure out a way to get their powers back. Using their collective skills, they manage to take down Zero after a brutal fight, and plot their attack on Brigg's estate. From there we jump over to a now cured Mettle and Hazmat, who are eager to spend time with one another, but are still worried about their friends. The two finally get to embrace and kiss with nothing between them. Meanwhile, Striker cozies up to Enchantress, just long enough for her to help him get the cure to get his powers back and Striker of course zaps her and gets ready to take down Briggs and get cures for his friends, when Briggs reveals he's been watching Striker, then uses Striker's salt content in his body to basically fry Striker with his own powers. Veil picks up the vial with the cure Striker took, which still has some of the serum left and runs to find help. Meanwhile the five powerless heroes head after Reptil and White Tiger's amulets, but are met by Coat of Arms, who says their amulets feel unappreciated, so she plans on taking them, but she'll have to kill White Tiger and Reptil first. Back with Veil, she runs to Mettle and Hazmat, and tells them how Briggs is about to kill Striker, and she needs help. Hazmat is hesitant because she likes being normal and the cure is forever, so Brigg's aerosol spray won't take her powers away again, but Mettle says how all he needs is that one kiss from Hazmat to last him the rest of his life, and they need to help their friends. Mettle drinks the cure and before Veil can drink it, Hazmat decides to, because she's the strongest and because Veil would dissipate into nothing. Hazmat's powers instantly returns but Mettle's do not for some reason. The issue ends with an extremely pissed off Hazmat ready to make Briggs pay.


Thoughts: It's crazy to think a year ago I didn't read this series and now it's one of my favorites. This issue was no exception, the stuff with Striker and Enchantress was great, the battle with the five heroes and Zero was great because we got to see Finesse take the leadership role. I really enjoyed the stuff with White Tiger and Reptil both wondering if their doing the right thing with their powers, and the scene with Hazmat and Mettle was of Peter/Mary Jane proportions. I loved this issue, and I can find nothing bad to say about it, just sucks that we only have four more issues left.

Veil: Jenny, I know Jeremy. The look in his eyes... he's going to kill them all. Finesse, 'Berto... whoever stands up to him...