Hey Todd Squad, today we're gonna check out the first issue of Venom since Rick Remender's departure. I'm on the fence about Cullen Bunn after Deadpool Kills the Marvel Universe and Spider-Man: Season One, but he's writing Venom, a favorite of mine, and even writers I don't like have been surprising me when it comes to a Spidey-based character. *cough* Chris Yost *cough* So let's see how Cullen Bunn fares with Corporal Flash Thompson, Agent Venom. 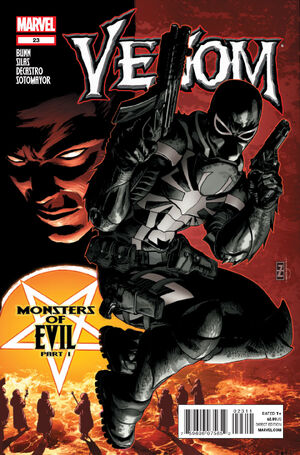 Summary: This issue starts off with Venom on a recon mission, after being told by Hawkeye that due to recent events that he's on probation and should not pursue anyone, he's strictly on recon missions. Venom's night starts off with him meeting up with a reporter by the name of Katy Kiernan, as she gives him info about the Department of Occult Armaments. Venom investigates but of course, things end up going haywire so he has to get involved. The Symbiotic Superhero has to do this one alone since for some reason his communication systems with the Secret Avengers are blocked while inside the building. Venom takes out a bunch of "Nazi demon-worshippers" and starts freeing their prisoners from containment pods when one attacks Venom. The seemingly possessed prisoner suddenly stops attacking when he see's the mark on Venom's soul left by Mephisto, and when Venom commands him to leave, a demon exits the prisoner's body, leaving him unconscious. Venom has no time for answers as Hellstrom appears and brings the fight to Venom. Venom somehow doesn't lose the symbiote when hit by Hellstrom's fire, which confuses Hellstrom as well, and he catches Hellstrom off guard, demanding to know his plan. Hellstrom says the D.O.A. are building him an army of volunteers and that Venom is just like Hellstrom in the sense that people are waiting for him to go rogue and come after him, just like they did to Hellstrom. He says Venom is marked by the beast and knocks Venom into the pods that house his volunteers, causing some of the liquid they are submerged in to waste onto Venom. Flash screams out in pain as the symbiote contorts his body into a giant, demonic version of Venom as the issue comes to a close.


Thoughts: Well this issue was odd... I'm not a big fan of the stuff with guys like Hellstrom and Mephisto, and I didn't care for the Circle of Four storyline, so this immediately put me off. I did like the stuff with Venom and Katy and I would like to see more of Venom and the Avengers, which I can assume will happen soon as Hawkeye finds out that Venom got involved instead of just gathering info. All in all, this was a normal average issue, I enjoyed it less that I would've liked but it's far from bad.

Katy: Anyone ever tell you that you look like Spider-Man?
Venom: I've heard that a few times. It goes in hand with "I thought you'd be bigger." Different guy, though.