Hey guys and gals, today's review is the last issue of the current storyline chronicling The Lizard. Let's see how Spidey deals with a Human Lizard and a ton of Lizard humans... or whatever. 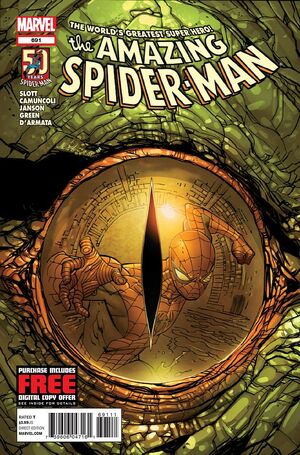 Summary: This issue starts off with Spidey getting ready for a fight, but he doesn't need to since the giant lizards are docile, considering Lizards and humans get alone fine. Hm... that was a twist. After hearing gunshots, Peter finds Carlie, who used them as warning shots for the Lizards thatt were near her but they're also docile. Peter see's Connors, who immediately injects himself with the Lizard formula, because he refuses to rot in a prison. Now the Lizard is pissed at Spidey because he wanted to stay human and enjoy things and couldn't, so a new and improved, stronger and faster Lizard starts to attack, but Spidey gets him away before he transforms fully, or he'd have control over the other Lizards. While Spidey and The Lizard fight in the streets, the Horizon Labs crew works on an antidote for the transformed colleagues, using Morbius' cure as a base. They come up with a cure and get it to Spidey, as The Lizard stops attacking people because he see's every kid as Billy Connors, every adult as Martha Connors, and he see's Spidey as Curt Connors. Spider-Man takes advantage of the Lizard's confusion and stabs him through the skull with the cure in a hypodermic harpoon needle. Spidey immediately regrets his decision, thinking he killed the Lizard, but the Lizard weakly tells Spidey that he failed and he isn't human. Spidey webs up the Lizard long enough for him to be transported to a super-villain prison. Back at Horizon, the employees have been cured and Max mentions to Hector that someone has stolen something from his lab, and he wants a private investigation. We then jump over to see Tiberius Stone presenting a completed Spider-Jammer to the Kingpin, and telling him he can have dozens in the coming weeks. Kingpin is pleased, but The Hobgoblin isn't and plans on doing something about it soon. Back with Spidey, he eventually goes to see The Lizard in jail, and he passes Morbius, who asks if Sajani is okay, he says he needs to know, but Spider-Man ignores him. He goes to see The Lizard and sees that he's fine, and with a clear conscious, Spider-Man leaves. As he leaves, the Lizard whispers that it works. Curt Connors is back, but his mind is stuck in the Lizards body, but he says to himself that he'll never tell, because this is his penance for what he's done to Martha and Billy, and he deserves it. The issue comes to a close as we see Madame Web noticing something in the Web of Life has changed and there's a new face involved, we then see a man known as The Devil-Spider, as he's told his brother never became The Hobgoblin, his brother, Daniel Kingsly is dead. The Devil-Spider unmasks to reveal that he's actually Ben Kingsly, and he's ready to get revenge on this new Hobgoblin!


Thoughts: Another excellent issue by Dan Slott. I love seeing the Lizard get humanity, and after having the Lizard stuck in Curt's body, having Curt stuck in The Lizard's was a genius move. Does this mean Spidey may have an unexpected ally some day? I'd think so. All in all, I really enjoyed this issue, especially the twist with Kingsly, I didn't see that coming at all. Once again, another issue I had no problems at all with, perfect issue in my opinion.

The Lizard: My name is Curt Connors. And this is my prison. My penance. My hell. And I deserve it.