Hey everyone, since I didn't get a chance to review the first issue last week, I figured I'd jump right into the second issue of Deadpool kills the Marvel Universe, for anyone curious what happened in issue one, Deadpool, after having something in his mind unlocked, and going on a killing spree against every hero, villain, and anti-hero in the Marvel Universe, after killing the Fantastic Four, so let's see who's next on The Merc with a Mouth's list. 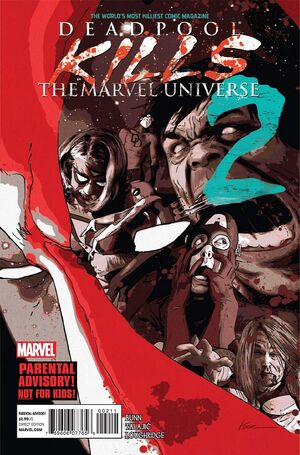 Summary: We start things off with the news chronicling Deadpool's rampage, as he's already taken out Doctor Doom, Ghost Rider, a few X-Men including Beast, and Pool's even Howard The Duck. From there we see Deadpool fight Spidey, but Spidey plans on getting Deadpool locked up instead of killing him like some other heroes want to, but he doesn't get the chance because he's shot in the head point blank and killed in the middle of the street by Deadpool. Deadpool tries to decide who he wants to kill next, his brain says it doesn't matter but Deadpool says it has to be something extravagant. While we cut over and see the Avengers planning on how to stop Deadpool, Jarvis runs in telling everyone Doctor Pym is missing and he said someone stole Pym particles. Right on cue, Deadpool expands a bunch of bombs using Pym particles and manages to blow up the Avengers, taking out Captain America, Iron Man, Spider-Woman, Ms. Marvel, Hawkeye and Wolverine. Cage stands out of the rubble ready to fight when Deadpool says he know Cage would survive so he put some bombs in Cage's coffee, then expands them causing them to explode inside Cage, killing him instantly. Thor is ready for a fight and throws Mjolnir at Deadpool, but Pool uses the last bit of Pym Particles he has to make Thor's hammer huge and fall on Thor, and since Thor is unable to move the giant hammer, it crushes him dead. Thor sets his sights on Hulk next but is ripped in half, Hulk leaves and falls asleep, and wakes up as Banner, but wakes up to being sliced in half by Deadpool, crossing Hulk off the list. The issue comes to a close as May Parker, Mary Jane Watson, Melita Garner, and a few of the other girlfriends of the killed heroes pool their money as revenge, and pay Taskmaster to kill Deadpool!


Thoughts: Damn this was good! Deadpool shooting Spidey in the middle of a crowd was crazy, but the way he took out the Avengers was just plain genius. Hell in one comic he killed Doom, The Avengers, Spidey, AND The Hulk! I'm not only wondering who can stop Deadpool... but who the hell is left? I'd have to gamble Wolverine? He was in the explosion but he has the healing factor so I figure he'll be back right? Also, can we please get a Venom killed the Marvel Universe? Please?! Oh, and TASKMASTER VS. DEADPOOL TO THE DEATH?! Hell....yes.

Deadpool: Gonna take a broom and a dustpan for you guys to "assemble" next time.