Hey Todd Squad, today we're gonna check out the most recent issue of Spider-Men, we left off with Peter going to the home of the deceased Ultimate Universe Peter Parker and unmasking outside the house as he's met by Aunt May and Gwen Stacy. 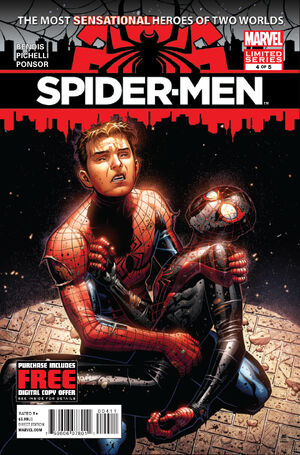 Summary: Things start off very hostile, as Aunt May walks up and slaps Peter across the face, and Gwen starts kicking him, as they obviously think this a cruel joke. Ultimate Spidey (Miles) shows up and tells the Universe, and he's aged, as Peter apologizes for coming there but says he needed to see them. Aunt May faints and wakes up a few hours later to Peter, Gwen and and unmasked Miles all upstairs talking about the differences between the worlds, but Peter doesn't mention Gwen's death. Aunt May eventually comes up and talks to Peter and see's that he is pretty much the same boy she raised, as they both quote the "Great Power" line. They touch on everything, including the Ultimate MJ being Goth and Moody while Peter's MJ is a model now, and even mention how Ultimate Pete and Kitty Pryde dated. Eventually the Spider-Men have to go, and Peter asks Gwen to look after Aunt May. Once the Spider-Men are back with Fury, they meet up with Tony Stark and try to figure out where Mysterio is broadcasting from. Miles quickly recognizes a building which gives them a hint where Mysterio's lab may be. Fury hops on the line and tells some agents he needs... everything, and the issue comes to a close as we see both Spider-Men web-slinging alongside Iron Man, Thor, and a group of S.H.I.E.L.D. agents.


Thoughts: Well... that was a very misleading cover. This was a fine issue, not much happened in terms of fighting but I enjoyed seeing Gwen, Miles, Aunt May and Peter talking about all the differences in both worlds, seeing Peter give Miles advice, and just having Gwen and Aunt May have a chance to say goodbye on happier terms. The ending with the Mysterio stuff seemed kinda rushed, and I'm not as excited for the final issue as I'd like to be, but I am wondering how things will end for Miles and Peter's team up.

Miles: Hey, do they have a Nick Fury where you come from?
Peter: Oh yes.
Fury: Yeah? What's he like?
Peter: Uh, white.
Fury: Sorry to hear that.