Hey Todd Squad, JT here and man oh man, I am falling apart at the seams! Haha, I didn't even have time to get a NCD post up yesterday, so I guess instead of letting you guys know what I picked up, I'll surprise you guys with a review until I run out of this week's comics. I decided to review ASM first due to it's 50th Anniversary and it's huge price tag! This book was six bucks, so it had better have some great stuff in it. So let's see shall we? 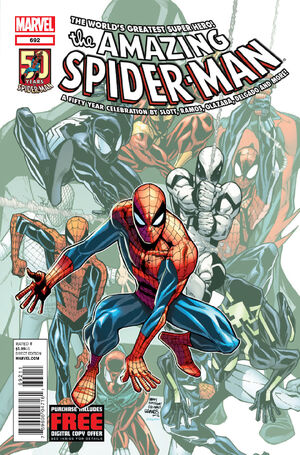 Summary: This mega-sized issue of our favorite arachnid has three Spider-Man based stories. In the first story we see a kid named Andy Maguire, who goes to school and is content with being a nobody, he's not a jock, a geek, a stoner, he's just there. He coasts by with average grades, has a mom and dad that are too busy for him and he's basically just an average kid. When his school visits Horizon labs and to see a new experiment by Peter Parker, who plans on debuting Parker Particles, something goes awry and the kid pushes a girl out of the way of a blast, and when he's hit, it gives Andy super powers. Unlike Peter Parker's origin, everyone see's and knows Andy has powers. Peter feels horrible that he could've killed someone, and Andy's parents quickly try to sue Horizon labs. Modell reaches out to the superhero/genius community and has tests run by Hank "Beast" McCoy, Reed "Mr. Fantastic" Richards, Hank "Giant Man" Pym, and Tony "Iron Man" Stark. We find out that Andy can fly, shoot energy beams, has super strength, super speed and force fields, but he can only use one power at a time. Reed then pulls Peter aside and tells him that Andy's powers will continue to grow, and how Hulk, The Phoenix and The Sentry are Omega level threats, Andy is currently an Alpha-Level threat. Modell assigns Peter to work with Andy to help make him a costume and gear like he does for Spidey, as they decide to hire Andy as their spokesman, Alpha. Andy quickly agrees, and his parents due as well when they realize how much money they can make off of him. Alpha wastes no time using his powers to show off to his fellow students, which rubs Peter the wrong way. Pete decides to take Alpha under his wing as Spidey and enter him into the Sidekick program, and teach him what to do and what not to do. When Spidey gets a call from the Fantastic Four to help out against Giganto, Spider-Man tells Alpha to stay put as, he's not ready yet. Alpha of course doesn't listen and ends up knocking out Giganto and getting all the glory, plus he steals Ben's catchphrase. A cocky Alpha then basks for the news cameras as Mr. Fantastic and Spidey talk about what a monster Spider-Man has mistakenly created. This story comes to a close as we see none other than The Jackal (!) watching Alpha, as he plans on doing what he does best, this time to the young hero Alpha.


Thoughts: I decided I'd just review the main story for this review, but don't get me wrong, the other two stories, especially the third one about Peter trying to make it to a meeting, were great, fun reads. As for this issue, I wasn't really looking forward to this storyline, but I'm really enjoying it. Alpha is kind of a less homicidal version of Damian Wayne, and he's a fun character. When he proclaimed that Spidey was his sidekick I couldn't help but laugh. I'm wondering where the character goes from here and what Spidey can do to get through to him. Plus, seeing The Jackal reappear was definitely unexpected, I can't wait to see how this story plays out.

Alpha: Put me in their "Sidekick Program" and everything. Even gave me Spider-Man as a sidekick! Cool, right?