Hey Todd Squad,the first review on tap for this week is the bloody, gruesome, awesome mini-series featuring our favorite Murdering Merc with a Mouth, Deadpool Kills the Marvel Universe #3. After taking out The Avengers in the last issue, say, "What else can Deadpool do?" Well, quiet down, I'm about to tell ya, right now. 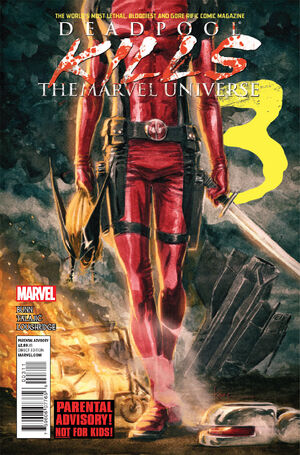 Summary: After a starting scene where we see Deadpool has already taken out Venom, Green Goblin and even Power Pack, we see that Taskmaster truly believes that Deadpool deserves to die. From there we see Deadpool torturing Professor X, making him call the X-Men to his location, and when they do, they fall into traps set by Deadpool. In the span of minutes, Deadpool kills Cyclops, Emma Frost, Magneto, Colossus, Gambit and Rogue. Deadpool then tells Xavier that this is his fault, he had him committed and Psycho Man opened Deadpool's mind, making him realize that his true problem isn't that he breaks the forth wall, but the forth wall is breaking him. Xavier interrupts and says he's shutting Deadpool's brain down, for good, but when he see's inside of Deadpool's mind, it's too much for him and leaves Charles brain dead. Eventually, Wolverine, healed from the Avengers attack, shows up and is ready to take on Deadpool when he's led into a room that has X-23 and Daken chained up, and every time they heal they're blazed by flamethrowers, restarting the cycle. An extremely pissed off Wolverine attacks Deadpool, and pool says Wolverine doesn't keep coming back because of his healing factor but because of his popularity. He then beheads Wolverine with a carbonadium blade, and says he's got big plans and all the popularity in the world can't save Wolverine. From there, we see Taskmaster arrive at the home of Doctor Strange and finds his corpse laying there, he can tell from the mess that Deadpool was looking for something. Taskmaster finds what Deadpool was looking for, as Deadpool has marked off a page that shows the map of the Nexus of all Realities, as this issue comes to a close.


Thoughts: Cullen Bunn is ROCKING this mini. I had mixed feeling about him after a subpar, in my opinion, Spider-Man: Season One, but he's redeeming himself on this awesome mini-series. I love that Deadpool has woken up and realized if he wants to stop all these heroes, he'll have to take out our world, since Wolverine and the other heroes will keep coming back due to US wanting them back. It's perfect for Deadpool's character. Plus, with the Taskmaster fight coming up, as well as the genius way Deadpool took out Daken and X-23, this comic was awesome. If I had any problems, it would be that the Wolverine fight seemed to go very quickly, I would have preferred a shorter convo with Prof. X and a longer fight with Wolverine.