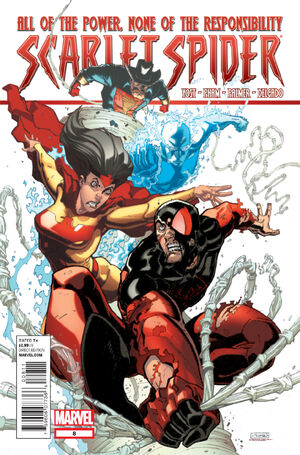 Summary: We pick up where things left off with Kaine taking on The Rangers, they tell him to give up but Kaine has a few questions, so after causing a distraction, Kaine escapes with Zoe. Once Kaine is alone with Zoe, he asks her why she blew up Roxxon and she explains her father is up to something in Galveston. Kaine takes her word for it and the two head there, unaware that The Rangers are not far behind their trail. Kaine tears his way through Roxxon to a room where Zoe claims there are tons of dead bodies but when they arrive there they find nothing. Kaine, afraid his second chance at life is now ruined, starts freaking out and plans to get Aracely and head for Mexico. Suddenly, The Rangers show up and manage to take Scarley Spider by surprise and take him down. Before things can escalate even more, a robotic/alien (?) member of The Rangers named Fifty-One scans the room and breaks the floor, which reveals a hidden room with all the bodies that Zoe mentioned to Kaine. The Rangers realize that Kaine isn't the villain here and start to apologize but there are other things going on, as they hear screams from another room. They run see a man being experimented on but of course, everything goes wrong and he turns into a giant monster as this issue comes to a close.


Thoughts: I actually don't have much to say about this comic. It wasn't bad, it wasn't great, it was passable. I'm enjoying Kaine as Scarlet Spider but I wish he had something to sink his teeth into, around issue 8 in the Venom series, Flash had done a lot more than Kaine has at this point, so hopefully Kaine can get that big story with Kraven soon...

Scarlet Spider: You guys, you call yourselves The Rangers... super heroes right?The Texas Twister: Yep.
Scarlet Spider: Good. This one's all yours.
Posted by Jason Todd at 12:10 PM