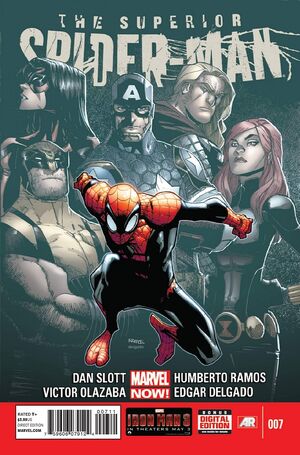 Summary: We kick things off with Dr. Elias Wirtham, a.k.a. Cardiac, as he's using his power suit to do good by helping patients that can't afford it with his team of Doctors. When he finds out one of his patients, a young girl with brain damage needs a device that will save her, he heads out to steal it. With Peter, we see he's able to control his hand slightly while Ock is asleep, and tries to write a note but Doc's awaken by his patrol app before Peter can do anything. The Superior Spider-Man heads after Cardiac to stop him, unaware that he's a modern day Robin Hood, and plans on ending him once he sees that Cardiac is trying to steal a device Doc Ock created. An enraged Ock is ready to attack but is stopped by Peter who manages to take control for a sec, but this alerts Doc that something is amiss and Cardiac uses his distraction to escape with the Neruolitic scanner he came for. Doc Parker heads to Horizon and is working on something, presumably to fight Peter's influence, but he's interrupted by his Avengers I.D. card with a priority alert. He head to meet with the Avengers, thinking they need him as a savior but walks into an intervention. Cap and the team tell Spidey he's acting weird, and their giving him mental and physical tests to prove who he is. Superior Spidey doesn't like to suffer fools though, so he tells them he's leaving, but Cap says he wasn't asking. Spidey takes Cap down and the Avengers get battle ready, telling Spidey he's not leaving. The issue comes to a close as the Superior Spider-Man gets ready to take on Earth's Mightiest Heroes as Peter's consciousness cheers on.

Thoughts: Man this issue flew by! This was actually my introduction to Cardiac but I enjoyed him here, hopefully he shows up more in the future.I also liked that Peter was getting control of his body back, but the fact Ock is aware of that may not bode well for him. I don't know how Ock is going to get out of this fight with the Avengers without everyone knowing Spidey's not Spidey, but I am interested in the fight. Let's not forget that Ock was able to form a plan to take out the Avengers during Ends of the Earth, and he used Peter's inventions... so now that he IS Spider-Man, he may have a contingency plan to take on the Avengers. I am eager to see what happens afterwards though, because the odds are not in Peter's favor now that Doc Ock knows he's still kicking around in there. Anyway, for this issue, although it flew by, I enjoyed it. I'm really excited to see how Spidey fares against Cap and company in the next issue though.

Thor: Whoever thou art, stand down! Or face the wrath of the Mighty Avengers!