Red Hood and the Outlaws #19

Hey X-Maniacs, JT here with today's review, RHATO #19(X here as well!  I'm crashing this bad boy and JT has no clue!  MWA-HAHAHAHAHA!!!). This is the first issue with the series' new writer, James Tynion IV so let's see how Jason, Starfire and Roy fare under his pen(They have to fare better now that Lobdell is gone!).

Red Hood and the Outlaws #19 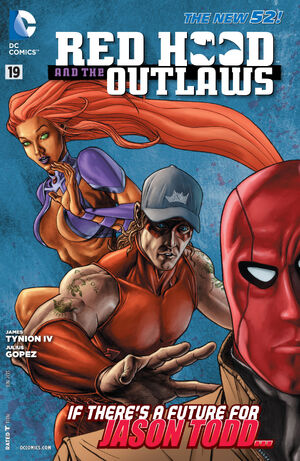 Summary: This issue basically focused on Starfire and Arsenal going after Jason, as he's heading to the old home of the All Caste. On the way there, they run into a bunch or drama(HA!  Love the in depth review here!), including a woman who tells them to turn back, but they don't listen because they're adamant that Jason needs their help.We then see that the woman was actually Essence in disguise, another member of the All-Caste(Yeah, that part was pretty weird...). On the way there, Roy gets sick from the cold...he's with a girl that has hair made of fire... how... whatever(Dude's a junkie, JT!  Obviously he has trouble making good decisions!). Anyway, Essence invades Roy's dreams to deter him by posing as people in Roy's life like Ollie, Hugo Strange (interesting), Killer Croc (Yep...), and his former dealer. Roy beats them all and wakes up refreshed and feeling great(I also wake up feeling great after I dream about beating up Killer Croc and Roy Harper's former dealer.  And Dan Didio.  That's a big one for me.) as he and Kory arrive at the All-Caste home base. They find Jason but he doesn't know who they are. The issue comes to a close as we see that Jason went there to get his bad memories, like Joker creating him(Boo-ya!!), removed, but instead S'aru removed them all.

Thoughts: Alright, well when I first read this issue, I hated it. I think we'd all agree that this team should be doing more things like The Outsiders did, more street level stuff with maybe a big power person to keep Starfire busy(Yeah, like in Judd Winick's AWESOME Outsiders run!). This team isn't the kind that belongs in Space or doing magical stuff, that's like Dick Grayson finding a Genie's lamp(Named Gene Nee!  HAHA!!!!!  Sorry, Inside joke...) or something. Jason and Arsenal work better as street level heroes doing street level things(Screw you and your logic, JT!  DC doesn't deal with that crap!). So when I saw this issue was about the All-Caste, I was disappointed because I expected to get away from that when Lobdell left the book. But while talking to X(Hey, that's me!), he pointed out that by erasing Jason's memories (we all know he's getting most of them back) that he can kind of retcon the stuff with Joker creating Jason, Jason's face almost being burnt off, as well as all of the All-Caste stuff(That X guy is a damn genius!!!  Seriously, that guy...  He should be named king of the universe or something.  He is the man!). Even if Jason doesn't forget that stuff, he was told by S'aru he wouldn't be welcome there anymore anyway, due to the fact erasing memories is against the All-Caste stands for. So, I'm reluctant but I'm pulling for Tynion to give me some good stories starring my namesake and his band of Outlaws(Well he sure can't do worse than Lobdell.  And that makes me happy.  Much like when people mention me in their reviews...  I like that sort of thing...).

Jason Todd: My butler would kick your ass all the way back to Gotham City.