Guardians of the Galaxy #2

Hey X-Maniacs, JT here with my first review of the week. I decided to swap out Ultimate Spidey and review Guardians of The Galaxy, but I plan on reviewing Ultimate Comics Spider-Man in the Best of the Rest post on Monday. Now, let's see what the Guardians are up to in this issue.

Guardians of the Galaxy #2 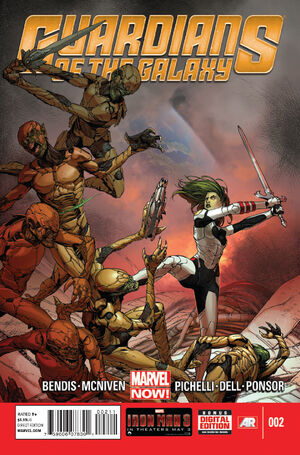 Summary: We kick things off with the Guardians trying to call for help with the Badoon ships that are attacking Earth, but their communication systems have been blocked. The Guardians (sans Groot because he's still a toothpick at this point.) and Iron Man head out to take on the Badoon forces, with each person taking on one ship.We see a quick flashback and see that Peter's dad, J-Son, as well as the Supreme Intelligence of the Kree, Gladiator, Young Annihilus, Queen of the Brood, Asgardian All-Mother Freyja, and Y-Gaaar of the Badoon have all come together and deemed The Earth as too dangerous to join the larger community of Space. J-Son cites the fact that Earth has been visited by The Watcher many times, defeated Galactus time after time, has destroyed the cosmic entity known as the Phoenix Force, and has even defeated Thanos, but the All-Mother says Earth is one of her realms, and warns J-Son to stay away from destroying it. J-Son says fine, and declares the Earth off-limits, with a smirk. Back in the present, we see how formidable the Guardians are, with Drax destroying, Gamora...gamoring... (Shut up...) and Rocket Raccoon repeatedly saying "Blam. Murdered you!" whilst murdering. After taking care of the Badoon forces, the Guardians are approached at gunpoint by Spartax's forces, who place the Guardians under arrest as Prisoners of War.

Thoughts: I really enjoyed this issue! I loved seeing the team in action, and we got a lot of it here. I'll admit, I found myself laughing at Rocket's "Blam! You're murdered!" type of catchphrase while taking care of his enemies. I also really liked the dialogue here, especially between Quill and Iron Man. Even the meeting with J-Son and the other bigwigs was interesting and didn't seem like it slowed the issue down. I'm interested in seeing how the Guardians deal with being arrested by Peter's dad, since this was obviously his plan from the beginning. Plus, I can see them being broken out by Groot, since he's the only one that wasn't there for the fight/arrest. All in all, this was another really good issue, here's hoping the series continues to be this good.