Injustice: Gods Among Us #3

Hey X-Maniacs, the final review of the comic week is Injustice: Gods Among Us #3. In related news, today is also the release of the Injustice: Gods Among Us demo, so go check it out and play as Batman, Wonder Woman or Lex Luthor, since only those three are available for the demo. Then come back here, give my your PSN Name, and I'll beat ya up when the game comes out later this month! Now, let's get to the review!

Injustice: Gods Among Us #3 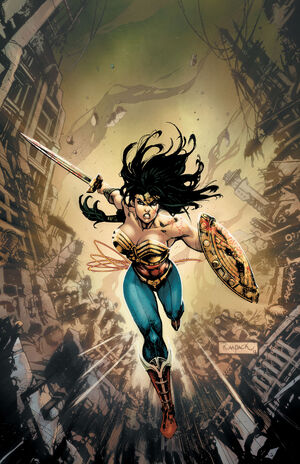 Summary: This issue starts with the good ol' US of A getting ready to bomb someone when Superman steps in, destroys the missile. It seems the Government aren't too happy with Superman playing peacemaker, so The President gives them the order to take Superman's parents. They kidnap the Kents and burn their house to the ground, and Superman arrives there just in time to get a message from Mirror Master, as he's got the Kents captive thanks to the Government. He gives Superman a message, his parents will be safe as long as he stops getting involved with Government activities, which only incites the rage of Superman, and his loyal teammates. They go after the Rogues until they find Mirror Man, and once they do, Superman rescues his parents. The President is then paid a visit by Batman, who tells him his stupid plan has only served to unite Superman's allies. The President notices Batman didn't include himself as an ally of Superman's, saying he knows that too much power can corrupt someone, but Batman leaves without saying anything. The next story features Wonder Woman being confronted by Ares. Ares asks if Wonder Woman plans on replacing Lois in Superman's, but Wonder Woman doesn't answer, saying only she'll do whatever Superman needs. Ares realizes that if Superman and Wonder Woman stop all wars, he'll be powerless, and while Superman will do a lot, he won't do what's sometimes needed, but Wonder Woman will. He attacks Wonder Woman, planning to kill her now before she becomes a threat to him, but Superman shows up and helps out Wonder Woman. She quickly picks up her sword and slices off Ares' hand, then impales him through the chest, leaving him stuck in the ground. She tells Ares, he can have his hand back when he can be trusted with it, leaving the God of War battered and bloody, as she and Superman walk off, with Dianna still clutching Ares' hand. Ares lies there, contemplating what he'll become in a world with no war, as the issue comes to a close.

Thoughts: I'm kind of surprised to say I didn't care for this issue much. It wasn't bad, but I enjoyed the last two issues so much that this one fell flat. I thought going after Superman's parents just seemed like a stupid move that would make him more angry, and Wonder Woman treating Ares like a bitch for lack of a better word just made him seem way less intimidating, especially with her taking his hand like a toy from a kid. I did like the way the lines are being drawn in the sand, you can see Ares will obviously be pro Batman, because he wants to end the future reign of Superman and Wonder Woman, but other than that, not much really happened in this issue that was integral to the actual story or the game.