Hey comic readers and true believers, JT here with my first review of the week, and it's Scott Snyder's Batman! The last issue dealt with the recent death of Damian Wayne and Bruce getting a pep talk from Harper Row, now let's see how Batman is reeling now. 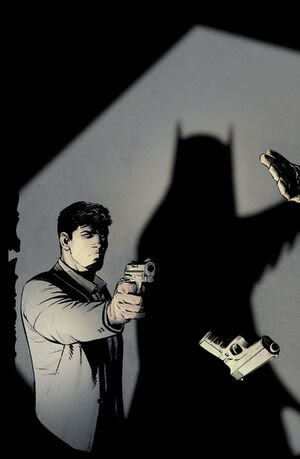 Summary: In this issue, we start things off with a bank robbery stand off with the police and none other than Bruce Wayne. Bruce has a hostage with explosives and uses her to make his way out of the building while Commissioner Gordon tries to talk him down. When he asks by a billionaire is robbing a bank (excellent question...) Bruce throws the money and smoke comes out of it. He then climbs on his motorcycle, shoots Gordon in the chest with a shotgun, then rides over him while driving away, all the while managing to not somehow get shot in the head by a bunch of officers, since no one shoots him in the head. For the record, I would've shot him in the head. Anyway, we jump back to six days ago and see Batman watching footage of Damian on his cowl visor that he recorded from when they'd go on patrol. He's interrupted by Alfred, and Alfred tries to talk to him about it but Bruce doesn't want to hear it. When Alfred mentions one of Bruce's friend's has committed suicide, Bruce finds it strange and looks into it. While looking at the dead man's house, Batman finds a very alive version of him and manages to get a bit of blood to sample before he can escape. While sampling the blood, Batman discovers it's Clayface (duh) and that his DNA has started to mutate, so he's no longer Basil Karlo, instead of being an actor and trying to mimic people, he can now fully become them from their DNA. While in his office discussing a new suit Batman needs (Batman Inc. is in continuity now, remember) with Lucius Fox, Lucius attacks Bruce, revealing that he's actually Clayface. The issue ends with Clayface saying he doesn't want Bruce's money, he wants to use him to end Batman, once and for all.

Thoughts: First things first, I'll say I enjoyed Alfred trying to talk to Bruce about Damian's death and mentioning Jason's death. I also really liked that Bruce was watching videos with Damian from hos Cowl, that's definitely something I can see Batman doing. Now that I've said what I liked, let's get to the stuff I didn't enjoy. Okay, well I saw the Clayface thing coming a mile away. It was either that or Ivy was controlling Bruce. I hated that no one felt the need to gun down Bruce, rich guy or not, when he not only shot the Commissioner with a freaking shotgun, but then rode over him as well with a motorcycle. Also, he was wearing Batman gear under his shirt. So is that on purpose? Clayface clearly doesn't know Bruce is Batman, so is he trying to say he is? Then the entire thing of doing a bank robbery, when he could easily just go on TV, say he's disbanding Batman INC. and that Batman is a criminal that shouldn't be trusted that threatened his life, and boom, Batman is vilified at Wayne's hands. Robbing a Bank then realizing, "Oh yeah, I don't need this money. My Bad!" just seemed unnecessary. Yeah, this issue just didn't do it for me, which is a rare miss for Snyder.

Bruce Wayne: Yeah, well, sometimes being a hero gets old.