Hey blog readers, JT here with my first review of the week and it's a big one to say the least. Today we're gonna see the beginning of the fallout of Spider-Man's new direction in Superior Spider-Man. With Peter Parker's dead and his body taken over by the devious Doctor Octopus, who claims he will try to be a hero, what will happen with one of Peter's worst enemies living his life? Let's find out right now! 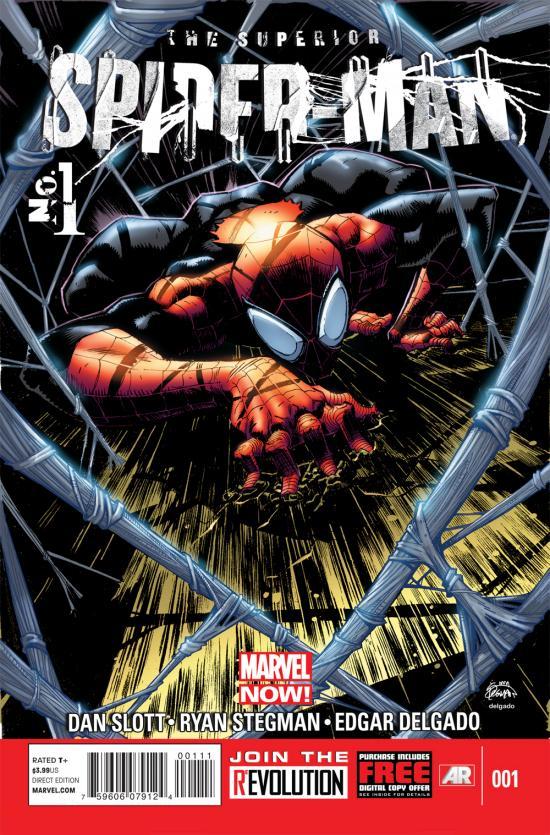 Summary: We start things off with Peter visiting the grave of Doctor Octopus, as he bids his old life farewell. While there he overhears a police call over his bluetooth headset and heads to the scene of the crime. When the Superior Spider-Man arrives there, he's met by Boomerang, Shocker, Speed Demon, Overdrive, Beetle and The Living Brain, calling themselves the new Sinister Six, which obviously pisses of Doctor...Parker. Spidey engages in a fight with the group until he's overcome by Speed Demon, who is so fast he's faster than his Spider-Sense and manages to lay hundreds of punches on Spidey in a matter of seconds. Doc proclaims that Parker was insane and decides to just swing away, but when Boomerang throws a Nitro-Rang (Patent pending) at Spidey and misses, it comes back at a Police Officer, and Spidey surprisingly lunges forward at takes the hit, wondering why on earth he did that. When Boomerang comes up to kill him, Spidey slices his chest with his claws, as we later learn was a way to inject him with nanites that allows Spidey to hear what he says later with the Sinister Six. After defeating the Sinister Six, who hightail it out of there, Spidey asks the officers if he can have The Living Brain, and asks them to deliver it to Horizon Labs so his associate can study it. While studying at Horizon and calling people Dolts, Parker is confronted by Max Modell, who claims although he likes Peter's inventions, most can be used as weapons. Doc cuts him off at the pass and shows him plans for other, more peaceful, inventions, which Modell loves and tells Parker to carry on. After having a bit of a breakdown, realizing whatever genius ideas Octavius has will now be attributed to Parker's legacy, he calms down, remembering he's Parker now, and he has a the with the stunning Mary Jane Watson. While on their date, Doc is so caught up in his own thoughts they literally cover MJ's speech bubbles, which was pretty funny, in fact the only time Doc isn't thinking is when he's staring at MJ's lady parts. When she asks if he has to wear his headset during their date he says he's listening to the Sinister Six plot their next plan due to the nanites from earlier. MJ asks why he doesn't just go after them now but he says he's giving himself a tactical advantage. The next morning, The Sinister Six break into Horizon labs and enter Spidey's trap, as he's got greased floors, a web blockade, and a power dampening field which makes easy work of this new Sinister Six, but doesn't stop Spidey from playing rougher than necessary. Boomerang, the last to go down, is afraid of Spidey and tells him he wins, but Spidey starts to beat him to a pulp, saying he gets to win, and this is what happens when you cross this Spider-Man. Just as Doc prepares to deliver the killing blow, his arm is grabbed by none other than the ghost of Peter Parker! It seems that Peter's ghost is still around his body, and although Doc can't see or hear him, Peter says he doesn't get to kill and he doesn't know why or how he's back, but he's still in the fight and he will find a way back as this issue comes to an end.

Thoughts: Well, I wonder if eveeryone who was pissed about Peter's death enough to burn their copies of ASM #700 expected Peter back so soon. Now, I really enjoyed this issue, I loved Doc here. He's doing a horrible job as Peter though, lol, calling people Dolts? It's so out of Peter's style that it's hilarious. I enjoyed the way he brushed away Modell, when he looks to be planning something big, as well as the way he prepared for this new Sinister Six. Just seeing all the work he put into it so he could take them down with such ease was funny but also showed how clever Doc is. I liked the scenes with MJ as well, especially with him being a more cocky, drinking, Peter, unlike the original Parker. The twist ending really surprised me though, and I love it. A lot of people probably see this as a cop out or something, since they think Peter will always just stop Doc from doing something evil, but when have things ever been that easy for Peter? I can easily see him trying to stop Doc and not being able to sometimes, and I think that'll make it more interesting, sure he won't let Doc kill or makes him save civilians and stop crimes, but he won't always be able to, and Doc IS still in control, don't forget that. But I do like Peter being there, not only trying to find a way back but also trying to keep Doc on the straight and narrow, because like so many of us said, it's not going to be easy to take a villain and just make him good, but with Peter watching over him, unbeknownst to Doc Ock, it makes for a very interesting dynamic.

Superior Spider-Man: UNBELIEVABLE! Of all the unmitigated gall! Well I guess they're letting anyone call themselves the Sinister Six these days.