Hey blog readers, it's me, it's me, ya boy JT! And I'm here with my third and final review (which doesn't seem like a lot since X wants to Marathon Man his reviews...) but it's quality over quantity, and luckily neither of us have much of that! But, enough about that, here's my final review of the week. 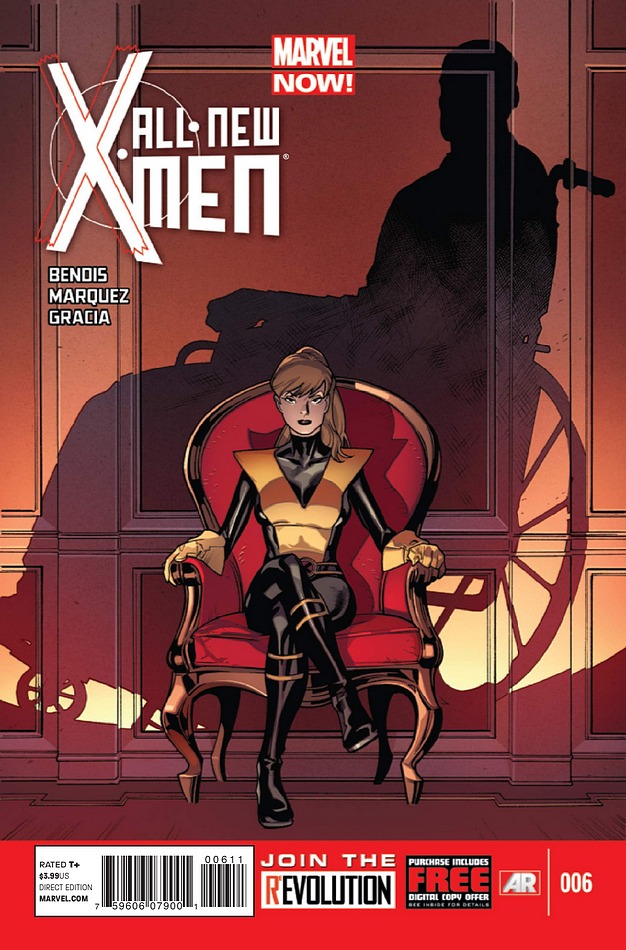 Summary: This is the first issue with Kitty Pryde, former Headmistress, as the appointed Guardian of the Original Five X-Men. We start things off with Jean having a nightmare, and she's comforted by Kitty. Jean's psychic powers overwhelm her once again but Kitty is able to help her get them under control, by using a technique she learned from the other Jean, kismet eh? After having a moment with Kitty, Jean is confronted by Storm who tells her she needs to get ready to lead her team. Jean says Scott is the leader, but Storm tells her since she made the decision for them to stay, she's the leader now. Girl power and whatnot! Speaking of Scott, he's tired of being judged by everyone for something he hasn't done, so he decides to leave the campus, via stealing Wolverine's motorcycle. Wolverine hears his baby being driven away and jumps in a truck, following Scott and talks him into coming back to the school, at least it seemed that way until Scott blasted him and took off with his bike again. Also, Angel finally gets to stop pretending he's on a show with Poochie the Dog, as he finally got the answer to the question "Where's Angel?", which popped up more times in this issue than a Buffy the Vampire Slayer forum.  Angel runs into his present self, who calmly asks "What are you, like me from the past?" and the two decide to fly around, because present-Angel is pretty much a stoner or a gnarly dude, either way, Old School Angel seems to be confused by his present self. (If you want to know why Angel's so different, click here, although it includes past spoilers.) The issue comes to a close as we see Mystique watching viral footage of the scuffle Wolverine and Cyclops had earlier, which was recorded and uploaded to the net. Mystique realizes that Cyclops is noticeably younger than usual and then she then proclaims she wants  to see this for herself.

Thoughts: I know I say it every issue, but BENDIS continues to kill this series. I'm happy Scott stopped taking shit from everybody for something he hasn't even done, so seeing him leave out on his own, while knowing absolutely nothing about this world, which is kinda dumb, still made me happy. I also really enjoyed the scene where he commented on how expensive Magazines are today, and asked why the water was bottled, it's almost like listening to my Grandma, but in the form of a young, energy-blast eye-beam shooting mutant. I also liked seeing Angel meet up with Angel, if only for the pure... awkwardness of it all. Just seeing straight laced old-school Angel meeting up with "Chillax bro" Angel was entertaining. It was like watching Ben Stein meet up with Snoop Dogg/Lion or something. If anything slowed this comic down, it would be the beginning. Don't get me wrong, I enjoyed the little exchanges with Jean, Kitty and Storm, but other than Storm making Jean the leader, without confronting the rest of the team with her choice, nothing happened here. You could argue Jean was able to relax and control her powers a bit, but that seemed like the slowest part of the issue, which isn't bad. All in all, this was a decent issue of a great series, and adding Mystique can only make things better.

Scott Summers: Why is the water bottled now? Did something happen to the water?