Hey Todd Squad, JT here with my first review of the week, and it's the penultimate issue of Batman's Death of the Family arc. Bats has finally returned "home" to Arkham Asylum to see what The Joker has planned for him. 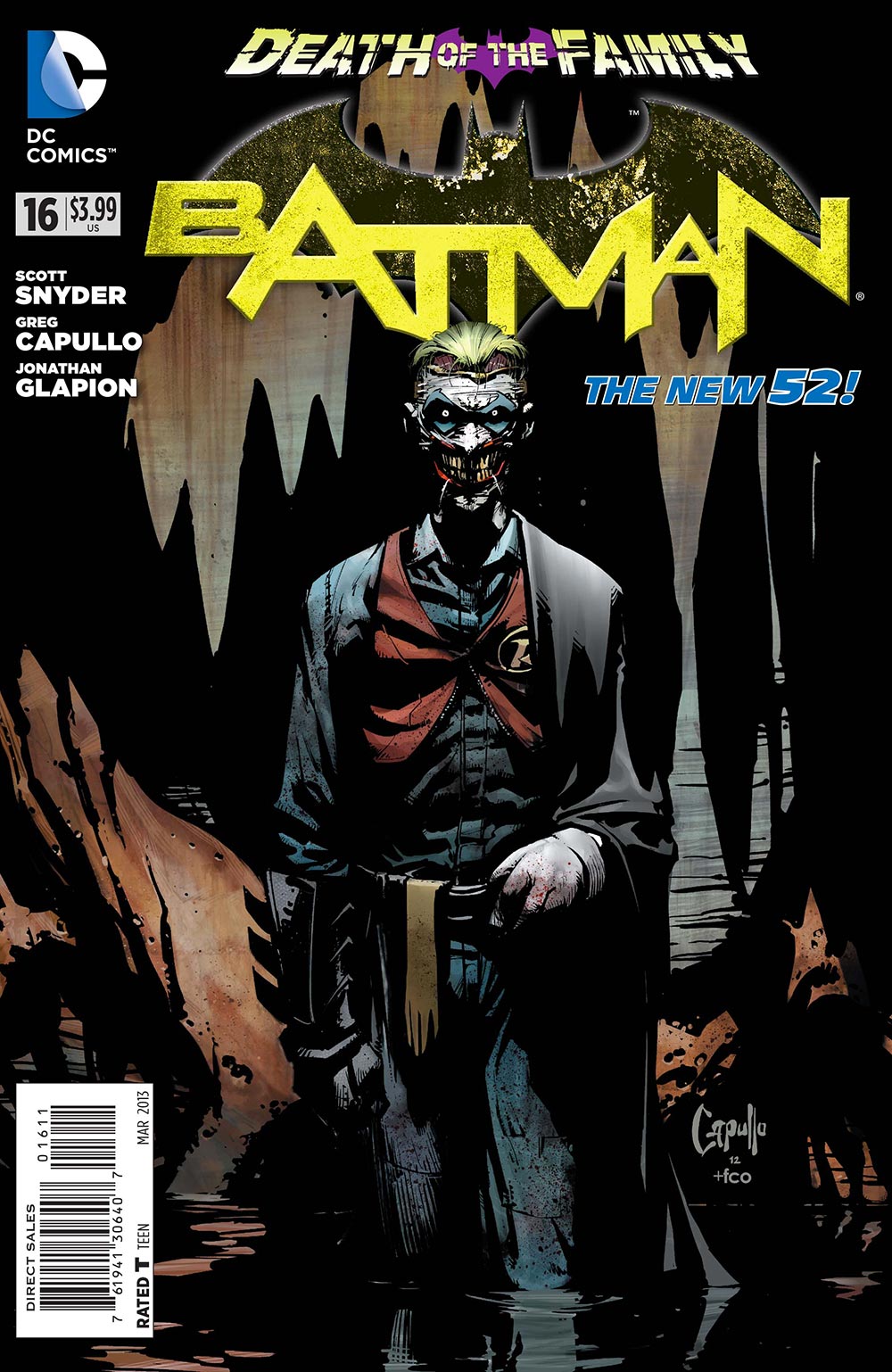 Summary: Batman finally arrives at Arkham Asylum and we see The Joker's master plan unfold, although he isn't exactly done putting it together. It starts with having a bunch of guards dressed as him and Batman, dancing in puddles water, for days on end or The Joker will electrocute them to death. Bats manages to save them with relative ease, then is led into a trap that has him fight at least a hundred goons, armed with riot gear and flaming weapons. Batman disposes of them, although he has a bit of trouble, and is greeted by The Joker's present for him, courtesy of the Dollmaker, he'd sewn a bunch of people together, while still alive, and made them into a tapestry with some of Bats and Jokers greatest moments, including the Joker Fish and the Death of Jason Todd. A very annoyed and pissed off Batman continues his trek through the asylum where he makes short work of Mr. Freeze, Clayface, and Scarecrow before arriving at The Joker's last room, a.k.a. Batman's Throne Room. Batman charges in and is shocked to be greeted by his Court Jester, The Joker, as well as his Man of the Cloth, The Penguin, his Strategist, The Riddler, and his Judge, Two-Face. Joker tells Batman they could have served anyone, gesturing to some civilians he has dressed as Superman, Aquaman and Wonder Woman. Joker has them play "Excalibur" with a chainsaw, which leads to "Superman" getting electrocuted to death. Batman gets past Joker's last line of defense, or so he thinks, when Joker drops a cage, separating Bats and Joker's crew. The Joker, with flies starting to circle his rotting, decaying face, stops Bats in his tracks by showing him video Nightwing, Red Hood, Red Robin, Batgirl and Robin all having fell to The Joker, as Joker says that Bats can be as good as he wants, he'll never be able to win as long as they're around. Batman asks what he's done with them, but Joker tells him he'll find out if he sits down, but if he doesn't, he'll never find a trace of them unless he sits down in his throne. Batman, defeated, walks up to his throne, which is actually an electric chair, and sits down, pulls down the head strap and is shocked so badly his mouth foams and blood gushes out of his nose as the issue ends.

In the back-up, Two-Face, Riddler and Penguin want to shoot Bats to make sure he's dead but Joker stops them, saying there's more to his plan. The three villains want to join him, but this is just Joker, Bats and family, so he drops a cage on them. They turn to Riddler to free them but he passes out, due to some tiny tranquilizers Joker put in the suit he gave Riddler. Two-Face wants to shoot Joker, but Joker throws out a ton of variables, including the fact he gave Harvey that gun, so it may backfire and shoot Harvey, or it could shock him to death, or it may be a perfectly fine gun, but Harvey, given too many choices, can't depend on his coin so he just silently gives up as The Joker laughs. Lastly, Penguin offers Joker money, but he doesn't want or need it, but he does offer to show them a bit of what comes next. Joker gets a platter and removes the lid, showing only Penguin and Two-Face, who are in awe of what they see. The issue ends as Joker gets ready for his final act, the family dinner, with him and the Bat-Family.

Thoughts: I have mixed feelings on this issue, and I'll tell you guys why. First things first, I enjoyed the end result, with Joker yelling at Bats to sit on his throne, the back-up where Joker systematically picked apart Two-Face and made a lot of excellent points, the way Batman finally had to admit that his kids are his weakness, because if they weren't in danger, he'd clearly have won by this point. The things I didn't necessarily enjoy was the way Batman just ran through the asylum disposing of everyone with ease. Don't get me wrong, I played Arkham Asylum, I beat up a shit load of goons to get to the end, so I'm not shocked that Bats could take out all those goons and punch a horse in the head. I also get that he was supposed to be motivated and tired of Joker's crap, so that's why he didn't spend much time beating them, but seeing the way he easily disposed of Freeze, Clayface and Scarecrow kinda annoyed me, because over the last year, those three characters were built up as threats, hell Freeze especially by none other than Snyder himself. Just seeing each of those guys taken out in a page each kinda annoyed me. Other than that, I enjoyed this issue, and I am curious about what's under the platter. Obvious money says it's Alfred's head, face, something, but I doubt that because it's too obvious. At the same time, it has to be something that's easily recognizable to Two-Face and Penguin... and the platter shows up at the end of Batman and Robin, as well as Batgirl. So I literally have no idea what it could be, but I AM interested in what you guys think it is, so let me know in the comments.

Joker: You'll grow old wondering what happened to them. What i did to each one... NOW SIT YOUR #%^ DOWN!