Hey Todd Squad, JT here with my second review of the week, this time we're gonna check in with Peter's clone, Kaine, in Houston. So let's see what the Scarlet Spider is up to shall we? 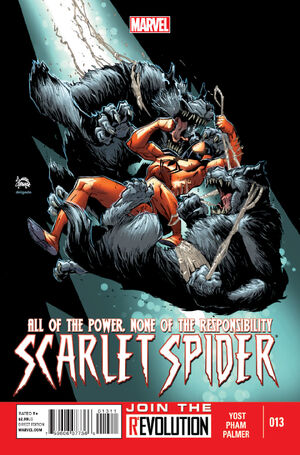 Summary: In this issue we see Kaine continuing his war on crime and attacking people that are trafficking slaves. He saves a young woman that reminds him of Aracely, and we then see Aracely having a nightmare. We're also introduced to a Spanish brother and sister duo who are known as The Wolves, and their after Aracely. They believe they will be granted wishes as a reward once they return to mysterious Aracely to where she's from. They manage to find Aracely as she's out with Kaine, explaining her nightmare. They tell Kaine to give up the girl, but Kaine grabs Aracely and web swings away to the top of a building. He asks Aracely who the people are but she doesn't remember, but she lightly howls for some reason, which draws the Wolves to their location, as they've transformed into Werewolves. They attack Kaine and he manages to fight them off long enough to make Aracely escape. Kaine decides to use his claw to kill them, like he tried to due to Carnage, but rethinks it, thinking it will make him as much of a monster as they are if he kills. Kaine's moment of hesitation allows the Wolves to overpower Kaine, and leave him hurt and defeated as Aracely tries to escape on the streets but falls over, feeling Kaine's pain due to her mysterious powers. After being defeated, Kaine is hurt and laid out as the female Wolf turns back into human form and starts to lick at his wounds, taunting him as Kaine, hurt and unable to move realizes that the Wolves are actually eating him. Kaine recites a prayer in his mind as he slowly loses consciousness and this issue comes to a close.

Thoughts: This was a very interesting issue. I've been waiting to find out more about Aracely and this was a great step in that direction. I'm also liking Kaine's internal struggle, as he decides if he's still the man he used to be, or if he's the hero he wants to be. The Wolves are interesting and I'm wondering how they plan on getting wishes by using Aracely, Yost really set a lot of questions in motion which I can't wait to get answers to. I will say the ending surprised me, how is Kaine going to heal from being eaten by Werewolves... I...I don't even know what to expect, so i guess that's a good thing in terms of keeping me interested, which I definitely am after that ending.

Brother Wolf: You are Spider-Man, but not. Your scent... the same, but different.