Hey guys and gals, JT here with my second review of the week, which is the first official issue (not a .1) of Avenging Spider-Man, starring the self-proclaimed Superior Spider-Man. So what do you get when you mix Superior Spidey, Wolverine, and a giant arachnid? Let's find out right now. 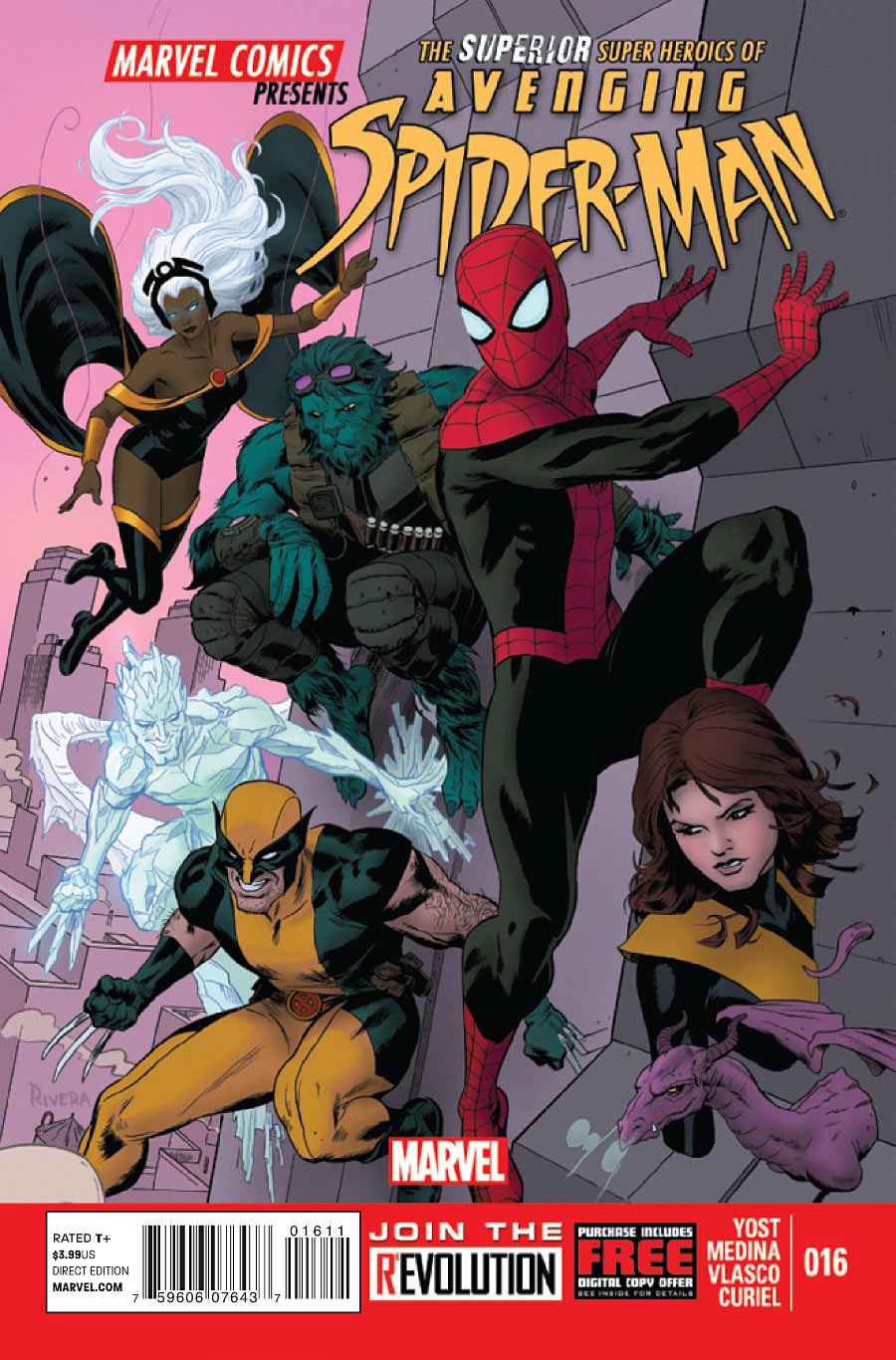 Summary: This issue started things off with New York being attacked by a giant Spider. Doc Parker, still getting used to fighting crime instead of inciting crimes, tries to take down the giant spider, which he notices has human-like eyes for some reason. Superior Spidey doesn't get paid by the hour though, hell, he doesn't get paid at all, so he says screw this "figuring it out" nonsense, and plans to just stab it to death with a pointy object. If that's not heroic, I don't know what is. Fortunately for the Exterminators of New York, this trade secret doesn't get out because Spidey's subdued by the X-Men, who decide this is a job for them, since the Spider is part mutant. Thanks to his goggles, which probably include google, Spidey has info on each of the X-Men, including Wolverine, Storm, Beast, Kitty Pryde, Iceman and Rachel Grey. Spidey realizes Rachel being there may be a problem, since she could read his mind and destroy his entire plan. In between his thinking, Spidey leaps into action to save Storm from a blast that the Spider spits at her, after hearing from beast that the spider has three different strands of DNA for some reason, Mutant, Spider and something else. After saving Storm, Superior Spidey manages to stop the spider in an surprising, yet unconventional manner, which rubs Wolverine the wrong way. Wolverine approaches Spidey and pushes him back, leading to Spidey decking Wolverine. He recounts the memories of Logan teasing Peter, but Doc won't put up with it, as he's stronger, faster and superior in every way. Surprisingly, Spidey makes short work of Wolverine, and we find out that the Spider is actually a woman, as she transforms back into a young woman, but when Rachel reads her mind, she doesn't have any memories. Rachel's findings are cut short when Spidey is attacked again by Logan, who tells Rachel to read his mind, cause he's not himself. Doc decides to play the "Parker card" and starts lobbing insults at Logan, to seem like his usual joking self, and asks who hasn't wanted to clock Wolverine, to which his own team agrees. Afterwards, Beast realizes the girl has human, mutant and arachnid DNA, and they say it couldn't be Mr. Sinister since he's apparently dead. The X-Men decide to take the girl as Spidey swings off, already having figured out that the girl is a clone, and he has an idea who's behind it, but he's not looking forward to dealing with it. Turns out Spidey's guess is right, as the issue ends with a shot of The Jackal, who now apparently has access to Mr. Sinister's vials of genetics.

Thoughts: This series just got a whole lot better. I enjoyed the idea of Spidey teaming up with his friends and such, but now, seeing Spidey team with and fight his friends is even better. I loved all the jokes he made here, about Logan, Iceman, calling Storm "Stormy", and such, as well as seeing him fight Wolverine and not pull any punches. The return of the Jackal is always a plus, considering the last few times we saw him were around Spider-Island and of course the amazing Alpha arc. Plus, Jackal vs. Superior Spider-Man has awesome written all over it, especially since he's one of the people who may actually realize he's not Peter Parker... he MAY even be the one to give Peter his own body again... so yeah, a ton of things may have been set up for the future, and this is a great way to start it off.

Spider-Man: The blue ape or cat or whatever it is...