Two DC reviews here, both rather long-winded... Apparently, the less sleep I get, the more chatty I get. Now this is good for those times when I have to stay up late to finish a paper for school, but not so good for typing up reviews. Don't believe me? Read on!

Summary: So 4 criminals have stolen a mess of Ancient Egyptian antiques and taken an asthmatic woman hostage in Gotham. Huntress decides to get involved in the investigation and manages to catch up to one of the crooks, who was trying to escape from Huntress on a motorcycle. Huntress shoots the guy in the foot with a crossbow bolt, but he manages to make his way up to a rooftop, where he is stopped by Catman. Catman scares the guy into giving up the location of one of the other three crooks, and Catman offers his assistance to Huntress(after stealing a quick kiss and catching a right hand for his troubles). Irregardless of Catman's kiss, Huntress decides to work with him and the two track Crook #2 to his pregnant girlfriend's house. The pregnant woman takes a run at Catman(?!?) and gets punched in the nose for her troubles, much to the rage of Huntress. Crook #2 grabs his gun and shoots at Huntress and Catman, missing Huntress but clipping Catman. Huntress manages to slam Crook #2 into the wall, where he squeals the location of Crook #3, who had the asthmatic woman and the antiques. After Huntress patches Catman up, he manages to track Crook #3's truck to a warehouse, a feat that surprises Huntress. The two bust in and discover Crook #3 standing next to the tied up hostage holding a katana(?!). Huntress tells Catman to take care of the woman while she takes Crook #3 down, which Catman reluctantly does. Huntress makes quick work of Crook #3 and puts her crossbow to the back of Catman's head, telling him the jig was up... Wha-huh?! Huntress explains that Catman was Crook #4(!), having figured out that fact by putting several little clues together throughout this comic. Realizing that he'd been caught, Catman pretty much tells Huntress she was correct, but in a non-incriminating way, since he knew Huntress couldn't nab him on the little clues she put together. Enraged that Catman(a potential romantic interest) had played her like that, Huntress slaps him(again) and tells him to get lost. Catman tries to plead with Huntress, telling her that since he “lost” his son he'd been on a downward spiral, and needed help. Huntress ALMOST gives in to Catman, but pushes down her instincts and tells him that she didn't want to see him again before leaving with the kidnapped woman(who I guess watched all this play out!). When Huntress is out of earshot, Deadshot steps out of the shadows and Catman reveals that he had set all of this up to dissuade Huntress from wanting to strike up a relationship with him because he's a bad guy.

Thoughts: You know, I was as confused as hell for some of this comic, but once I figured out what Catman was doing with his triple-cross, I realized that I REALLY enjoyed this issue! A lot! Like more than any issue of BoP since it's relaunch! So what did I like? Well, the fact that this issue spotlighted Huntress sure did help, plus there was NO Hawk or Dove in this comic... I think THAT'S what bugs me the most about this series, the fact that those two are a part of things. For me, they just haven't fit in yet. In my opinion, all you really need in this series are Oracle, Black Canary and Huntress. Jettison the dead weight, Gail Simone! 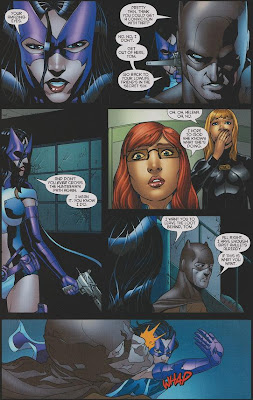 Catman sure did get slapped a lot this issue!

Summary: With Red Robin and Catwoman having failed their tests, Batman(Dick Grayson) heads to a rooftop in Devil's Square to meet up with Azrael, Crusader and Fireball. Basically Bats has to prove that he's righteous(or something along those lines), lest Azrael has Fireball obliterate Gotham City. With no real choice, Bats agrees to take this “test” and Azrael calls forth some guy who used to be an acrobat called the Prodigy back when Bats was a young kid. It seems the Prodigy was viciously beaten by some punks in Wisconsin after he made a move for one of the punk's girlfriends. The beating left him unable to do his acrobatics anymore, and pretty much paved the way for The Flying Graysons to take over the mantle of most impressive circus act in Haley's Circus. So what exactly does this have to do with Bats, you ask? It turns out that Dick had overheard the punks planning their attack on Prodigy but did nothing to stop them. That inaction is what drives Bats(according to Azrael), and is what damns him and all of Gotham... Sheesh, isn't that just a bit harsh?! He was only a kid! Bats tries to reason with Azrael, stating that all of Gotham didn't deserve to burn for the sins of a few, but Azrael is insistent that EVERYBODY in Gotham is a sinner. Bats asks if that included Azrael's sister-in-law and her kids, and reveals that they were on their way to the building they were debating atop of. Azrael has Crusader bring the woman and her kids to the roof to see why she hadn't left town yet, and she reveals that she was called by Red Robin to come by to try to talk some sense into Azrael. She also expresses disgust at Azrael's plans to destroy Gotham and refuses to see the “logic” in his actions. Somehow this all leads to Bats convincing Azrael to stab himself with his two swords to see if he was truly without sin, and thus deserved to judge everybody else. The swords show Azrael that he had been manipulated by Ra's Al Ghul, who wanted Azrael to destroy Gotham, since that act would lead to a global war, one that would annihilate most of the world, allowing Ra's to swoop in and take control of everything. Azrael is horrified that it wasn't God, but Ra's who set him on this path, and before he can figure out what to do, Fireball begins to slowly detonate. Bats tells Crusader to cover Fireball with a telekinetic forcefield, which is able to contain Fireball's blast, saving Gotham, but killing Fireball. In the end, Azrael and Crusader leave, angry about the way they were manipulated by Ra's, while the Prodigy(remember him?) tells Bats that he knew that Dick had watched the beating he received, and that he didn't hold it against Dick since he was only a kid and kids make mistakes. As for Ra's, he calmly states that while this particular plan failed, he'd keep trying, since he simply needed Bats and his allies to slip up one time for him to win.

Thoughts: Okay, that review was WAY longer than I intended, so I'll make this part quick. Two things. The first is that I didn't like the Prodigy stuff here at all. I didn't like the light it put Dick in, as it made him look guilty(-ish) for something he really played no part in. I mean he WAS only a little kid! The other thing I wanted to mention was that I LOVED Ra's parts here. We never really knew what Ra's was up to this entire crossover until the last few pages of this issue, but Ra's logic, and parting words all made perfect sense(in a crazy, super-villain sort of way). 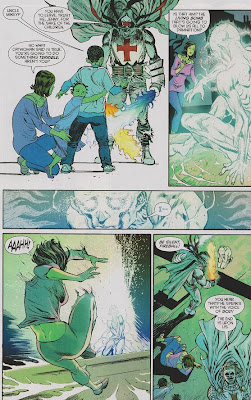