Hey there X-Maniacs, all I have to offer tonight is a measly one review. I just finished off a paper that is due tomorrow morning, and I'm not exactly in a very chatty mood, as the lack of sleep and the recent proliferation of school work is starting to grate on my nerves... I can honestly say that I am looking forward to this weekend(I plan on sleeping through most of it!)and of course next week, which is my last full week of school until July! As for tomorrow I fully intend to put up a new Flashback Friday post, so definitely be on the look out for that. All right, the sooner I get this review done, the sooner I can get to bed, so let's get a move on!

Review: This issue picks up from the last issue of Dark Wolverine(#85 I think), where Wolvie had stabbed his evil son Daken through the chest with what appeared to be the Muramasa blade. One of Romulus's henchmen, who was spying on the scene, reports what had happened back to Romulus, who is somewhat perplexed by Wolvie's actions, since, from the way he understood it, that was not a part of Wolvie's plans(which he had heard from Ruby Thursday and then had confirmed by Daken). Romulus makes his way over to the scene of Daken's stabbing, in order to see what he could glean from the crime scene, when he is approached by Skaar, who Romulus had tried unsuccessfully to make a deal with against Wolverine a few days earlier. Skaar tells Romulus that he wouldn't be working with him, and that he'd instead be sticking with Wolvie, so Romulus gives the signal to a few nearby terrorists who shoot Skaar with a rocket launcher. Skaar gets pissed about that(can't say I blame him!), and jumps over to the terrorists, who continue to hit him with heavy artillery, which is exactly what Romulus was hoping for, since Wolvie would now have to deviate from his plan of attacking Romulus in order to save any civilians who were caught in the crossfire. Wolvie sends Cloak over to Skaar to try to calm the brute down, but while Cloak is trying to talk some sense into Skaar, one of the terrorists detonate a large bomb, killing himself and nearly destroying a nearby building. With the building terribly damaged, and civilians caught inside, Romulus walks right over to Wolvie and gives him the chance to fight or to go and save the civilians in the burning building. Wolvie turns his back on Romulus and heads towards the building, which sickens Romulus, as well as Daken, who walks over to Romulus. Romulus is surprised to see Daken alive, and Daken explains that Wolvie didn't stab him with the Muramasa blade, only a regular sword, and the only reason he did that was to draw Romulus out of hiding. Daken explains that Wolvie's whole plan against Romulus is to expose him to the world, since Romulus's power comes from the fact that he has always been able to operate from the shadows, where he was untouchable. If exposed, everybody would know about Romulus, and as such, his mystique and power would be gone. Romulus tells Daken that if Wolvie's plan works out, upon Romulus's death, there'd be nothing left for Daken to inherit from Romulus's vast criminal empire, which Daken had always had his eyes on. This issue ends with Wolverine and Skaar approaching Romulus and Daken, with Daken declaring that he'd be helping Romulus against his father.

What I Thought: This was yet another strong issue of this series. Now it's Romulus(who's been forced into a confrontation with Wolverine right out in the open)and Daken, against Wolverine and Skaar. The real question here is, who's going to betray who first, because I have NO doubt that there are still many more twists and turns to go before this x-over comes to an end. I'm kind of leaning towards Daken turning on Romulus(which would explain why Wolvie stabbed Daken with the fake Muramasa sword, since Wolvie had to realize Daken would heal from a normal stab wound), and joining forces with his father to kill Romulus once and for all. After that, it'll be just Wolverine and Daken left, with Daken still wanting to claim whatever he could from Romulus's vast power-base. But then again, maybe Daken is really going to stick by Romulus(who in a weird way is like a father figure to Daken)to the bitter end. Or maybe Romulus will end up betraying Daken to gain even more of Wolverine's animosity... And that's what I'm enjoying about this storyline so much. It's not your basic, “Wolverine meets the bad guy, gets beat up and then stabs the bad guy” storyline, it's more cerebral(that's right, a cerebral Wolverine comic!), since the story could conceivably go in several different directions. I'm REALLY enjoying this and the Dark Wolverine series, and I honestly can't wait for the next part of this story in Dark Wolverine. 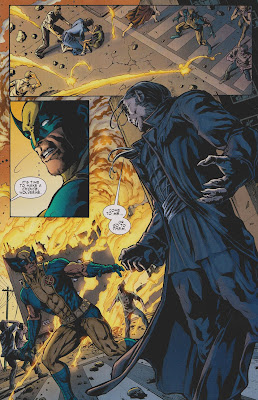