Hola X-Maniacs, JT here with my final review of the comic week, Scarlet Spider #12. I was set to review ASM 699.1 but I wasn't aware it was basically an issue to hype the upcoming Morbius series, and while the issue was fine, I figured I'd rather review Scarlet Spider's first issue post-Minimum Carnage, now let's get to it! 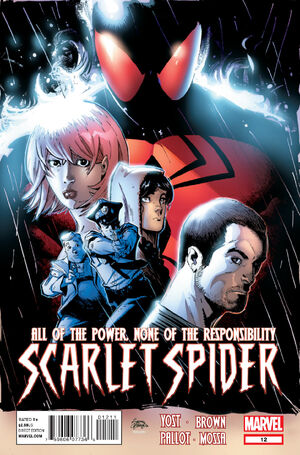 Summary: This issues starts off with a group of people who plan to steal some very valuable diamonds that are being held in a vault at the Four Seasons Hotel for some reason. From there we see Kaine, drunk as hell, trying to leave but Aracely is blocking the door way and holding a swear jar, demanding he puts in two dollars for swearing, but Kaine is determined to leave and go to Mexico after what he dealt with during Minimum Carnage, at least, until he passes out, after only three beers! I guess clones have a low alcohol tolerance. As Aracely and Wally pull Kaine over to the couch,  Donald answers the door and is confronted by Hotel Employee Courtney Johnson, who says she needs Kaine to check out, because a Belgian Ambassador has had the Presidential Suite booked for months and they need Kaine to vacate the room. Meanwhile in the lobby, a bunch of men wielding guns and dressed like Santa Claus tell everyone to get down on the ground. Kaine's friend, and hotel employee, Annabelle calls up to Kaine's room, interrupting the conversation between Wally, Donald and Aracely, when they say they really don't know anything about Kaine, and Aracely says they know everything. Interesting. When the phone rings, Aracely says it's Annabelle, she's scared, and Donald answers and confirms what Aracely somehow already knew. Wally grabs his gun and heads down to the lobby and Aracely follows after him, leaving Wally to try to wake up a passed out Kaine. Downstairs, one of the Santa's grabs Annabelle as a hostage, but she tells them if they want the big bucks, they should rob the man in the Presidential Suite. Back in Kaine's room, Donald pours him coffee and tries to wake him up, but a half-conscious Kaine just mutters that he's no hero, just a killing machine. In the lobby, Wally takes down one of the Santa's, but the others open fire, whereas Aracely walks up to one and tells him he's afraid, and he falls on the ground, screaming. Back with Kaine, he's now conscious and tells Donald how he's no good and how he's killed people and so many have died due to him. Donald retorts that Kaine has saved a ton of people, including himself and Aracely, and that Kaine is rough around the edges, but that's the kind of hero Houston needs. The pep talk is cut short when a Santa wielding a gun and holding Annabelle in a headlock bursts through the door, leading to Kaine beating the hell out of him, and suiting up, then beating up the Santa's in the lobby as well. When the hotel employee asks what they can do to repay Scarlet Spider for saving them and saving the hotel millions, Aracely whispers to Kaine "No Belgians Allowed", obviously so he doesn't get kicked out of his room. A confused Kaine says, he doesn't want Belgians allowed at the hotel to which they agree, perplexed. From there we see Kaine, finally feeling at home, while on the roof with Aracely, Donald, Wally and Annabelle. From there we see a letter arrive at the front desk for K. Parker, but the Woman at the front desk says they don't have a Parker registered there, as we see the envelope from J. Carpenter, aka. Madame Web Julia Carpenter as this issue ends.

Thoughts: First things first, awesome cover, it looks like a movie poster or something. Secondly, I'm loving Aracely. She's funny and she still has a lot we don't know about her, even a year later. She's clearly some kind of telepath but she can make others feel emotions too. Add that with the hilarious scenes of her telling Kaine to pay up for the Swear Jar and to say no Belgians, and she's quickly becoming one of my favorite supporting characters. I am curious to see what Madame Web's letter to Kaine was though, was she warning him about Doc Ock's plan? Was she trying to get him to return to New York? That's going to bother me, haha. But I enjoyed this issue, Kaine finally feeling like he has a home and having friends is a great step in the right direction for him, and Christ Yost, a man who's writing I didn't care for a year ago, has made me a fan thanks to his great job on this series. This is probably my favorite Spider title besides the main book, and that's saying something considering how many there are!