Hey guys and gals, JT here with my second review of the week, and once again, the only DC Comic of the week reviewed here. Man, things are not looking good for DC. Anyway, let's get to it! 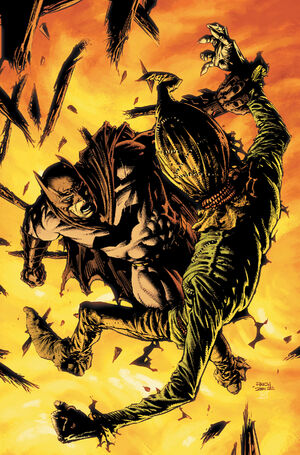 Summary: Things start with a bang as Batman, now on his feet after the torture from Scarecrow in the last issue, attacks Dr. Crane. The two battle and Crane breaks his wooden scythe off in Batman's shoulder, but not before Batman uses his grappling hook to shoot through Scarecrow's jaw. Batman uses this time to escape, as Scarecrow removes the hook string from his now dangling jaw. Batman, bleeding and still out of it from Scarecrow Toxin, escapes from the house and tries to make it back to the cave, meanwhile Scarecrow grabs a vial of his strongest toxin and releases the girl he'd kidnapped, and takes her to safety when he trips and falls, and tells her to run away, which she does, as his secret base explodes. Batman is wandering through the streets, incoherently when a gang finds him and plans on taking him out and becoming legends, but Robin shows up and saves his dad, and takes him back home, where Alfred nurses him back to health. Next we see Scarecrow, somehow having survived the explosion and now he seems livid, after hearing a report that Batman saved the girl from the explosion, when in actuality Scarecrow saved her. From there we see Scarecrow meet with The Penguin and pay him in diamonds for something he needed, and we quickly find out what it is. The issue comes to a close as we see Scarecrow dispensing Fear Gas, on Christmas nonetheless, all over Gotham, which has resorted to people eating people and scratching off their own skin, as the issue comes to a close.

Thoughts: This was an odd issue. I enjoyed it but Batman came off more villainous up until the end. I get that he was in fight or flight mode, but the hook through the jaw seemed kinda outta character for Batsy. Plus, Scarecrow saved the girl and everything, which made him seem like not such a bad guy until he got pissed and ruined Christmas, Grinch style. Other than that, this was an okay issue, it went by really quick, and this story seems to be stretching out more than it needs to, but I'm not complaining.