Hola comic readers, JT here with the first review of the week, and it's All New X-Men! With Cyclops and Magneto coming face to face with the Original Five, how will he react? How will they react? Let's find out right now! 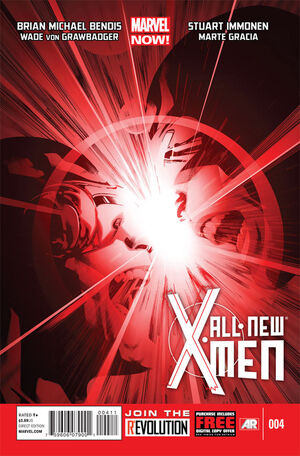 Summary: This issues starts where we left off, with the Original Five confronting Magneto and Cyclops. Cyclops of course thinks they must be clones or some kind of mind trick, but eventually confirms it's the real Original Five. Jean's psychic abilities kick in and she breaks down, after hearing Present Scott's thoughts about her, and how beautiful she is. She blasts Cyclops away, and knocks off his visor, which causes his new, erratic Optic Blasts to shoot wildly. Past Cyclops blasts Current Cyclops and their optic blasts explode, knocking one another back. The Original Five attack but Magneto has Magik pull them out via portal. The New Mutant that Scott and Magneto came to recruit is left confused after the impromptu fight, as someone films him, saying he's gonna be rock star famous now. Back at Weapon X, the two New Mutants talk about their powers and they agree to become new best friends... maybe a romance will stem from that? Anyway, Cyclops, Magik and Magneto show up, and Scott storms off immediately. Emma and Magik ask Magneto what happened, and Magneto says the Original X-Men showed up, and asks Emma if she had anything to do with it. Emma asks if he's going crazy again. Magik asks if they got the new mutant and Magneto storms off, leaving Magik to take that as a no. Back with the O5, Jean regains consciousness but is quickly overwhelmed by hearing everyone's thoughts. She manages to control her powers long enough for the gang to discuss what to do next, and Hank wants to head back to the Jean Grey school and check on his future self. Outside of Weapon X, Emma approaches Scott, telling him she had nothing to do with this, but who has the means and wherewithal to bring them back from the past to see him? Cyclops answers "Hank McCoy", but wonders why he would do this to him. Emma says because Cyclops killed Charles Xavier and this is Hank's way of punishing him. Back at the Jean Grey school, Wolverine and Storm argue over going after the O5, but they then show up and Hank tells them he needs to see his future self, he has an idea on how to help, and also demands the files from his second transformation. Beast wakes up in time to see Hank trying to help, but the issue comes to a close as Beast starts to go into cardiac arrest.

Thoughts: FINALLY! We got to see Cyclops run into the Original Five, AND he had Magneto with him! I loved all of this, Cyclops thinking it was a telepath or a shifter messing with him, then being entranced by Jean, and her being basically disgusted at the sight of him. I also loved the fact that both her and Magneto suspected Emma may be involved, but the best thing was Emma's pure disdain at Jean Grey being back, Emma is quickly becoming my favorite character of this series. I'm also curious as to if past Scott picked up how out of control present Scott is with his powers and if anything will come of that. All in all, this was another strong issue, we got the first confrontation, we got some info on the New Mutants, and a cliffhanger with Beast that I doubt will amount to anything in the next issue.