Hey blog readers, just a warning, this of course includes spoilers to Amazing Spider-Man #700 so if you haven't read that, or X's review of the main story of that issue, please do so first before reading this, now let's get to the review! 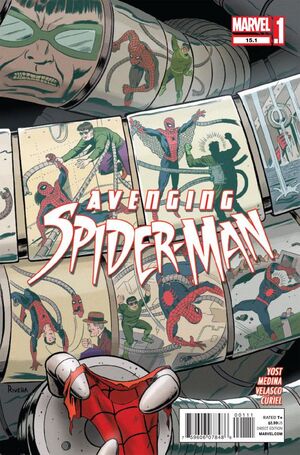 Summary: This issue starts the morning after Ock's big win, and he's quite content with himself as he's finally done what no one else could, he's beaten Spider-Man, he's killed Spider-Man, he's won. He basically explains how every time Peter used his tech against him, like controlling his Ock-bots and such, giving Doc Ock access to his mind and how he took his body with the Gold Ock-bot. He also says that in his final battle with Parker he saw what made Peter Parker him, a loving home and desires to do good, and he learned with Great Power comes Great Responsibility, more or less. From there we see Ock creating a new costume, new eye lenses that help show emotion through the mask and things of that nature. We also see him thinking about Mary Jane, and proclaiming that Parker is a fool. While out walking around New York, a criminal runs by after stealing from a store, and Ock says he's sworn to do good but petty theft is beneath him, when he surprises himself and sticks his arm out, clothes-lining the thief. He says it must be instinct, but I think that shows either Peter had an effect on Doc Ock, or Peter's consciousness may still be in there somewhere. After stopping at Horizon Labs, Ock decides to head to one of his many secret bases and come up with some designs and inventions there. He's ambushed by his own security system since they are tailor-made for him, just not him in Spider-Man's body. He's able to overcome his security systems but comes to the realization that no matter how often he ridiculed Spidey or said how much smarter he was than Spidey, Doctor Octopus always lost. He says he has to be better than that, better than what Doctor Octopus was. The issue comes to a close as we see the new Peter suiting up in his newly designed suit, claws and all, he says he's seen himself through Peter's lens now, and Otto Octavius' days of losing are over, as he's now the Superior Spider-Man.

Thoughts: And there you have it, the epilogue to ASM #700 and the Prologue to Superior Spider-Man #1. This issue started odd, it seemed like a step back since he was basically regretful for killing Peter at the end of ASM but he seemed happy he won here. But that was quickly rectified with his "instincts", him stopping that criminal was interesting because he didn't mean to, so clearly something is prompting him to, and that will be something to keep your eyes on. Other than that, most of this issue was just seeing Ock make a new suit and then realize that as good as he thought he was, Peter was better, and now he wants to be better than that, and he certainly has the tools with his mind in Peter's body. Also, Yost continues to surprise me, I wasn't a fan of his work when he worked for DC Comics but he's done an amazing job of making Scarlet Spider one of my favorite series and I'm interested in seeing how he writes Superior Spider-Man as he teams up/fights the X-Men, Captain America, and other Marvel Heroes and Villains, hopefully including Venom and Scarlet Spider. All in all this was a important issue that helped set the tone for a time where we don't have Peter Parker as Spider-Man (you know what I mean) in the 616 Universe or the Ultimate Universe.

Peter: Thank you, fat hippy and bald kid. I will look in on you later.