Hey comic readers, JT here with my first review of the week, continuing "Death of the Family", starting with Batman #15. Tomorrow, I'll have a review up for Batman and Robin #15, which is also apart of the "Death of the Family" banner, but first things first, let's see how Batman deals with the news that Joker lays on him, that he "knows who he is". 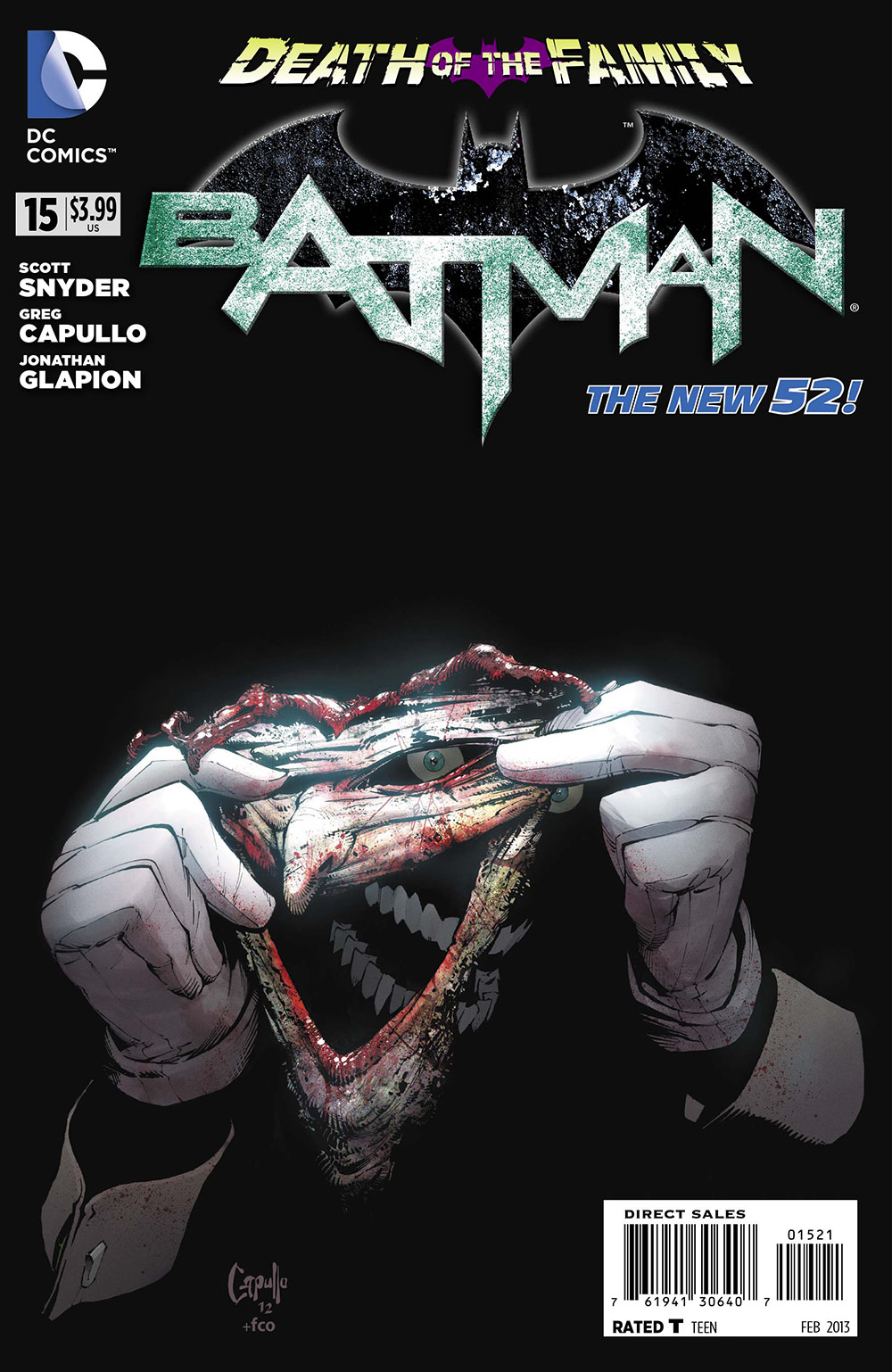 Summary: We pick up where we left off with Batman and Joker on the bridge, when Bullock and the GCPD show up. Bats tells them to fall back, but of course they don't listen, which leads to Joker's men, who were hiding in trees, to fire upon the GCPD with rocket launchers, and we can actually see through the masks their wearing that his men don't look too happy about it, which was great foreshadowing. Batman breaks free and runs through an explosion, which burns away some of his armor, and takes Joker down with a huge punch, before asking him where Wayne's butler is. Turns out when Bats punched Joker with his glove-less fist, Joker got some toxin onto his skin, which causes Bats to get weakened, and Joker kicks him off the bridge. Bruce awakes later, surrounded by the four Robins and Babs, as they tell him the rescued Alfred and caught Joker while Bruce was out, as Joker walks in, wearing Alfred's face and swinging an axe when Bruce wakes up for real. surrounded by Nightwing, Red Hood, Red Robin, Batgirl and Robin. The gang tell Bruce they need to talk, whereas Jason demands answers. Babs asks if its true that Joker knows who they are, but Bruce says it isn't true. Tim asks about him taking Alfred, but Bruce gives the same explanation that he just took Wayne's butler, he doesn't know. Nightwing explains that he freed Raya, an enemy of Grayson, not Nightwing, and Babs says he came after her mother. Tim asks what's the secret Joker says Batman is keeping from them, and Batman basically says one night after stopping Joker, before he'd taken on any Robins, after fighting The Joker and knocking him into the Gotham Bay, he never found him. After driving back to the cave in the Batboat, the next morning he found a Joker playing card in the cave next to the boat. Batman believes it must have been stuck to the boat or something, as he never found any traces to show that Joker had been in the cave, The former sidekicks think this means Joker has known Bruce is Batman for a while, and could easily figure out who they are over association, but Bruce is adamant he doesn't know, he just wants to cause dissension in the ranks, but Nightwing says Bruce is doing his job for him and that he should've told them about the card. Bruce tells them not to get involved, and to leave Joker to him. From there, Batman uses his resources to see who bought the pre-paid phone Joker used to call his men for the bridge attack, and discovers ir was a man named Dylan McDyre, who works at Arkham Asylum. Batman crashes into his window during family dinner and demands answers, and finds out that Joker had been watching the Arkham Guards for a week, threatening to kill their families if they talked. Turns out Joker has somehow taken Arkham Asylum hostage, and made the guards go home and pretend nothing happened, then come abck to work each day or he'd kill their families, he made them prepare the Asylum for something, calling it Batman's castle. The issue comes to a close as Batman arrives at Arkham Asylum and steps inside.

For the back-up, we see The Riddler in his cell, basically quizzing his guard when a few other guards come by, carrying a horse. They slip and fall with the horse, and it lands on one of the man's legs. Joker walks up, saying they need to be more careful and go get another horse because this one is ruined, and shoots it in the head, he then says that Guard is ruined too, and shoots him in the head as well. Joker then turns his attention towards The Riddler, saying how Riddler is one of Batman's greatest foes because he's always sharpening his greatest weapon, his mind, and if Riddler didn't leave Bats clues he would never catch him. He wants Riddler to join his "party" but makes him work for it, putting some Joker toxin in Riddler's cell, making Riddler free himself to prove he still has "it". Riddler frees himself and Joker welcomes him  to the festivities, and even offers to show Riddler his plans to see if he can guess what Joker has planned. Surprisingly, Riddler is stumped, but Joker says it's only for him and Batman to understand, as the back up story ends.

Thoughts: This was a great issue. I mean, to say Scott Snyder has been crushing it is an understatement. I loved the scene on the bridge, the foreshadowing of Joker's guards, which I didn't catch until my re-read for this review, and the awesome scene with Joker wearing Alfred's face, which was just great. I always love seeing the whole group together, and this was the first time we had all four Robins and Batgirl all in once place if I'm not mistaken, it may have happened during Court of Owls. And anytime Jason is written by someone not Scott Lobdell, I consider that a huge plus. If I had any problems here, it would be the way Babs seemed to be so calm, I mean one second she's asking Bruce if it's true.. then she says he came after her mother. Anyone that read those Batgirl issues knows he knows that's her mom... so why even ask if he knows the truth? That bothered me a bit, but the seeds were planted for Riddler to take the villain role in the next arc, and I'm still curious about what Joker has in the little book he flashed in issue 14, all in all this was a great story that continues to keep me on the edge of my seat.

Damian: What would you have us do, stay here in the cave?
Jason: Pfft. Like it's secure
Bruce: It's secure.
Jason: Tell that to Alfred.