Hey guys and gals, JT here with the last review of 2012 here at the X-Man Comic Blog. I know, weird right? Anyway, this review is gonna be a bit quick so I still have time to finish up the super mega boffo fun-time year end awards that myself and X are working on, so let's jump into this shall we? 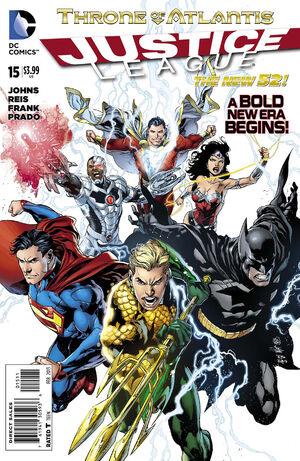 Summary: This issue focused on the U.S.S. Mabus, a hip that lost contact during a routine missile test into a supposedly empty ocean. Vic's dad calls him and asks him and the League to look into things when The Watchtower loses power for some reason. In Gotham, Aquaman helps Batman stop some of the Scarecrow's goons and explains the fish aren't listening to him and are swimming away from the Northeastern seaboard, so something must be wrong. Mera shows up to help Batman and Awuaman, and Bats mentions the U.S.S. Mabus, which Aquaman was unaware of. Meanwhile, Clark and Diana having a dinner date, with him telling her about his secret identity and how he uses the glasses to blend in, then gives Diana a pair and the two blend in well on their date, until a huge wave and an aircraft carrier get washed into Metropolis. Supes and Wondy spring into action, and Superman doesn't notice Lois is in danger, so she's jealous AND almost dies, HA!, when she's saved by Vulko, an Atlantean looking for Aquaman. In Gotham, Batman and Aquaman are waiting as Cyborg says the next wave is headed towards Gotham, causing Aquaman to say that Atlantis is declaring war with the Atlantean War plans, and he knows because he wrote them.

Thoughts: This was a very odd issue for me, I know it served to set things up for Aquaman but it made the League seem very... weak. I mean a giant wave came and it had to kill a ton of people in Metropolis since Superman and Wonder Woman were preoccupied with the carrier. I mean... in one panel WW says there are people in the streets who need their help, the NEXT PAGE, Vulko jumps out of the water with Lois, and Superman and Wonder Woman go talk to Lois... they NEVER GO SAVE THE PEOPLE!!!! But that aside this was basically just a set up issue so I won't judge it too harshly. The back-up with SHAZAM was actually the best part of this comic...so it still perplexes me he doesn't have his own series...

Wonder Woman: What is it?
Superman: It's a job for us.